Skip to content
Home|Featured, Rally Results|Rally Round Up: RAL GTA
Previous Next

Rally Round Up: RAL GTA 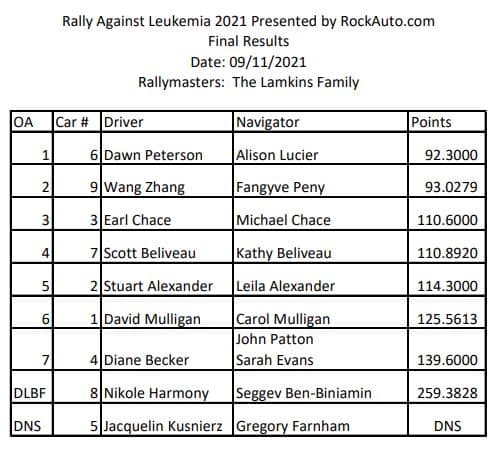 For the 2021 edition of Rally Against Leukemia, the Rally program joined the Racing program at Palmer Motorsports Park on September 11, 2021 during their Pig Roast Weekend. The event also welcomed RockAuto.com as a presenting sponsor and thanks to them for the gift cards that were raffled off during RAL weekend at NHIS back in August.

Jon and Kelli Lamkins laid out a ‘scavenger hunt’ short distance event featuring 10 questions located in the eastern half of Springfield County Massachusetts. While their initial intent was to have a short, easy event, the beautiful views, quaint New England villages, and picturesque country roads the area afforded led to a longer, more challenging event.

It was a perfect September day as 8 teams accepted (and completed) the challenge of finding the 10 answers in the least amount of miles. Along the way they visited the following sites:

The East Brimfield Lake location provided an unexpected (and unplanned) challenge as the combination of a Farmers Market and Craft Fair along Route 20 in Brimfield resulted in a time consuming traffic snarl for teams that visited that clue in the afternoon. After getting through the traffic and finding the clue, teams found less traveled roads to get back to the finish at Palmer.

At the events end, long time GTA competitors Dawn Peterson and Alison Lucier scored their first team victory with a score of 92.30. Autocrossers and first time rally competitors Wang Zhang and Fangyve Peny finished second with a score of 93.0279. Earl and Michael Chace squeaked out third place over Scott and Kathy Beliveau by a 110.60 to 110.892 margin.

Thanks to all the teams for competing and donating to NER’s RAL charity.