Skip to content
Home|Featured, Racing Life|Have Fun with Cars and Family
Previous Next

Have Fun with Cars and Family 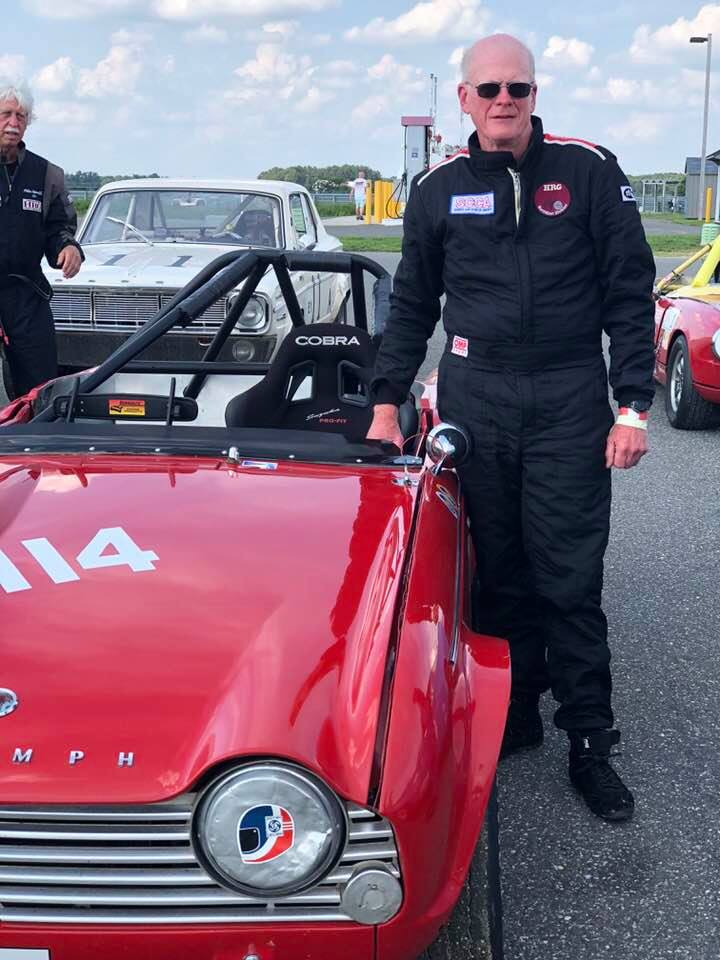 Phil Gott is a wonderful example for how members can have #FunWithCars, spend time with their family, and serve others!  Phil spent years crewing for an amateur racing team; competed as a driver in autocross, road racing, and road rally; served in various leadership roles for the New England Region (NER); volunteers as a licensed tech inspector (scrutineer), and shows up to help run events like the autocross course for Dartmouth’s Formula Hybrid competition.  Phil’s children grew up coming with him to the races.  Three of his four kids have raced in autocross or road racing, and his grandchildren are showing interest too.

Phil is an active member of the New England Region (NER) SCCA for over 48 years, but not everyone knows him yet!  He is a native of Massachusetts and currently lives in Princeton, MA. with his wife Jean Green.  Phil has four kids: Becky and Dave from a previous marriage to Joanna Ellis, and two girls named Carolyn and Veronica with Jean. He earned his mechanical engineering degree from Lafayette College and worked as a consultant in the automotive industry most of all his professional career.

Phil standing next to his red Triumph TR4a at an HRG event at New Jersey Motorsports Park.

Phil first discovered the SCCA more than fifty years ago while crewing for the team of Dave Ammen and Gary Rutherford.  The two drivers raced their twin Alfa Romeo GTAs all over the country, including northeast area tracks like Bryar, Bridgehampton, Lime Rock, Watkins Glen, and the old Thompson Speedway (an earlier layout before road course reopened in 2014). Ammen qualified for the National Runoffs twenty years running and is well remembered having served in various leadership roles for our region and the national organization.  He was inducted to the SCCA’s Hall of Fame in 2019!

Phil began doing autocross back when there were lots of parking lot venues and remembers racing at Shoppers World at Natick, the Great Barrington Mall, Auburn Mall, and the Cumberland Mall in Maine.  Phil finally joined the club in October 1973 knowing you can’t win a regional championship if you’re not a member and Phil says the “win was in sight.”  He says “back then you also had to be a member to enter Solo Nationals.”  Phil went for his first National Solo competition in 1974 and won the class championship.    He and his wife Joanna Ellis shared driving her Triumph TR3b and she finished 4th in class.  Becky and Dave, their two young kids, came along for the long trip to Wisconsin. The young couple drove round trip in a 1948 Desoto, a car Phil owned since he was 11 years old.  He says “we dragged the Triumph out and back on an open trailer and the Desoto towed great.  I still have that old Desoto in my barn.” 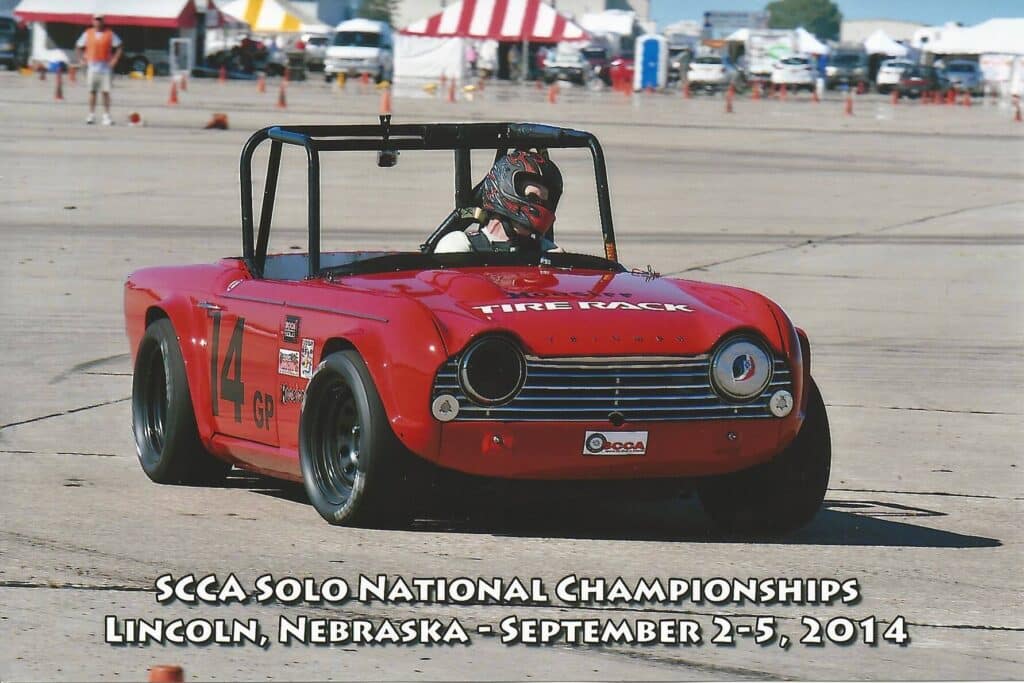 Phil driving in another Solo Nationals competition.  Co-driving son Dave was set to win the championship when their TR4a suffered a mechanical and Dave failed to finish his third run. 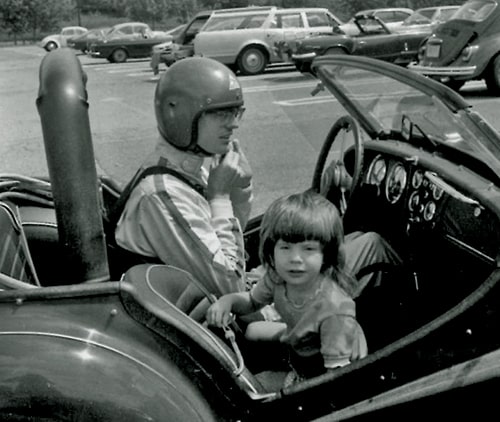 Becky with her dad Phil at the Shoppers World parking lot in Natick ready for another autocross run.

Phil fondly remembers the New England Region ‘auto toss’ group always felt like one big family.  He says “during lunch breaks adults and kids would have Big Wheel races, remember those?”  Phil says “everyone watched everyone else’s kids playing together at local events, but I don’t recall many kids at the National Solo competition.”

Driving the Triumph TR3b in autocross competition was fun, but they retired the car because the body was flexing so much in twisting turns the body mounts were fatiguing.  The car was too nice to risk destroying.  Phil recalls the car was bought with Joanna’s first paycheck and it was special for her.  He proudly says “she still has that car!”  According to Phil, the TR3b went in for a body off restoration decades ago, but was unfinished when the body shop craftsman slowly doing the work passed away.  Nobody else in the shop wanted to touch it, so Joanna brought her car back home in bits and pieces. Their son David is helping his Mom put it back together now!

After retiring the TR3b Phil took some time off to build a dual purpose autocross and road race car.  He says “I bought an old Triumph TR4a as a $75 crusher-ready-rusty-bucket and started with that!  The only thing I farmed out was the roll cage.  The only original parts remaining on the car today are the main tub and front hood. It has a new frame, new fenders, and a new trunk lid following a minor accident.”

Both Phil and Joanna received their road racing competition licenses in 1979.  Phil remembers their TR4a was the points leader in EP class in 1980 and again in 1981, but because points were split between husband and wife, they finished 2nd and 3rd in the class championship.  Before the 1982 season they flipped a coin, deciding one person would run all NER championship races and the other only Northeast Division events.  Joanna won the New England Region Road Racing Championship (NERRC) in 1982! 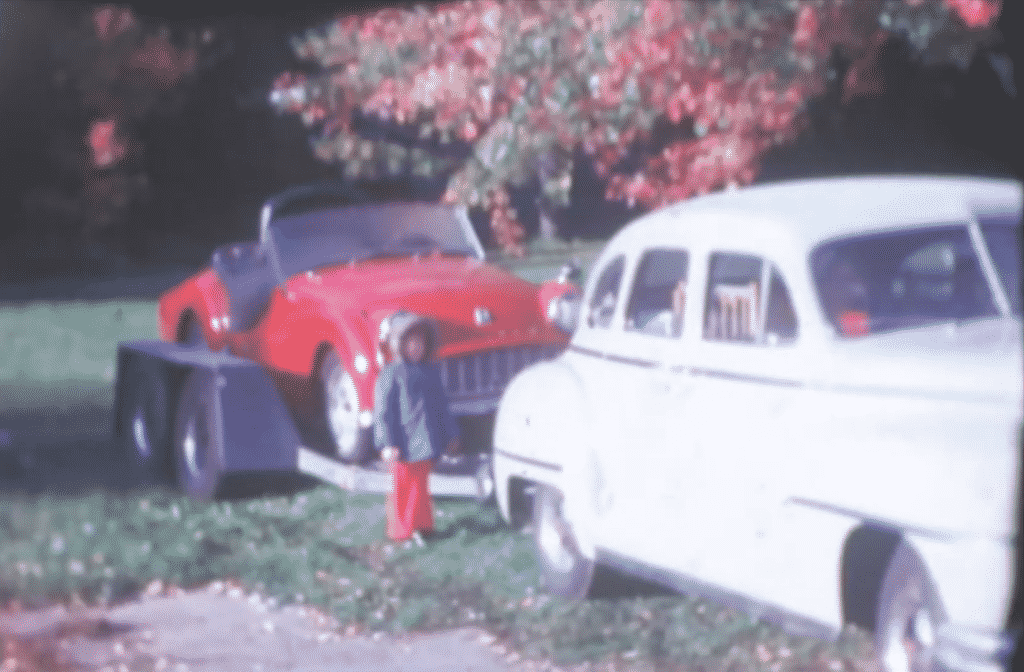 Becky with her mom’s Triumph TR3b loaded up on the trailer and ready for the drive to Wisconsin for the 1974 Solo Nationals.

Phil tells a great story about his in-laws visiting while he and Joanna were road racing at Bryar.  After Joanna’s mother passed away, her father remarried.  Phil’s new step-mother-in-law, Carlotta, had been brought up very British, very calm, and proper.  Carlotta’s father was a British diplomat, so she was accustomed to traveling the world and mingling in high social circles.  Phil explains the old Bryar Motorsports Park was literally carved out of a gravel pit and says “the paddock was a giant sandbox, everything got dirty, everything had this patina of dust on it.”  Young Becky and Dave were off playing with other kids in the paddock, humorously known as ‘track rats” when riding their bikes in packs.

Phil vividly remembers Carlotta telling him “you should be ashamed of yourself Phil, bringing your children up amongst all these ‘other people’ like this.”  Phil says he looked around and responded “yeah I know, I get what you’re saying Carlotta, I mean this guy next to us is a physician, the fellow over there is a lawyer, and I think that man over there is a real estate developer, he’s doing very well for himself.  The older fellow parked behind us runs a small business and that young guy over there is a banker.”  Phil remembers Carlotta walking away shaking her head as she went.  Phil believes the race track’s paddock is a great leveler.  He says “we’re like a big family and it’s a great environment for kids.  We’re all the same in the paddock, what you do for a living, who you love, what you look like, how big or small your bank account is, it doesn’t matter.  We’re all the same at the race track!” 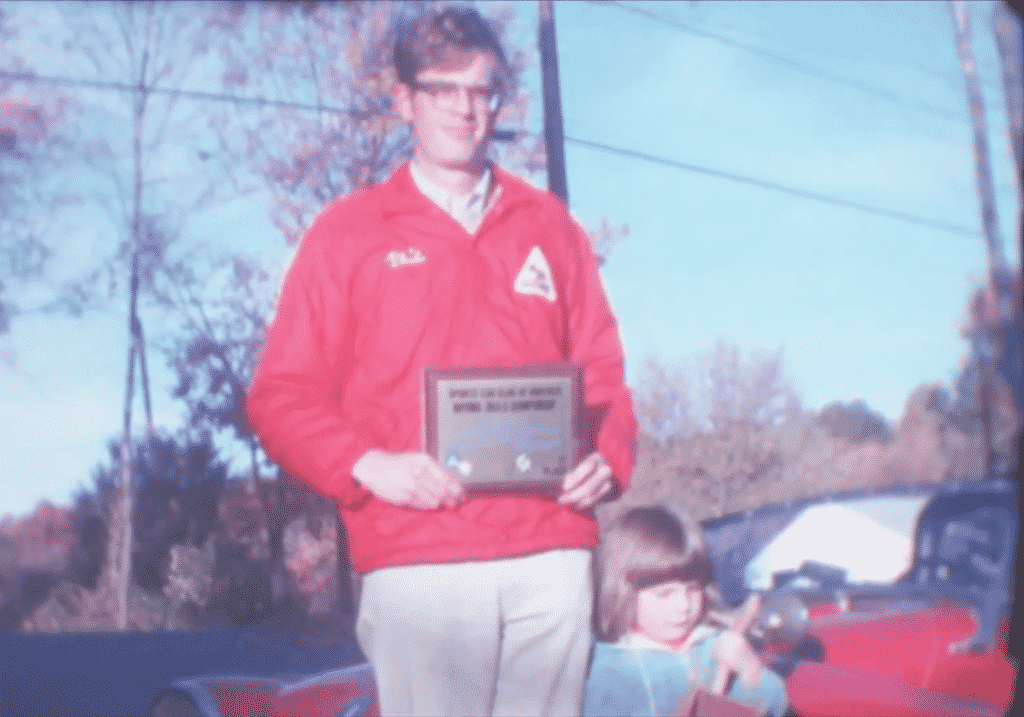 Becky standing beside her dad (Phil) holding his plaque as a new national solo champion. 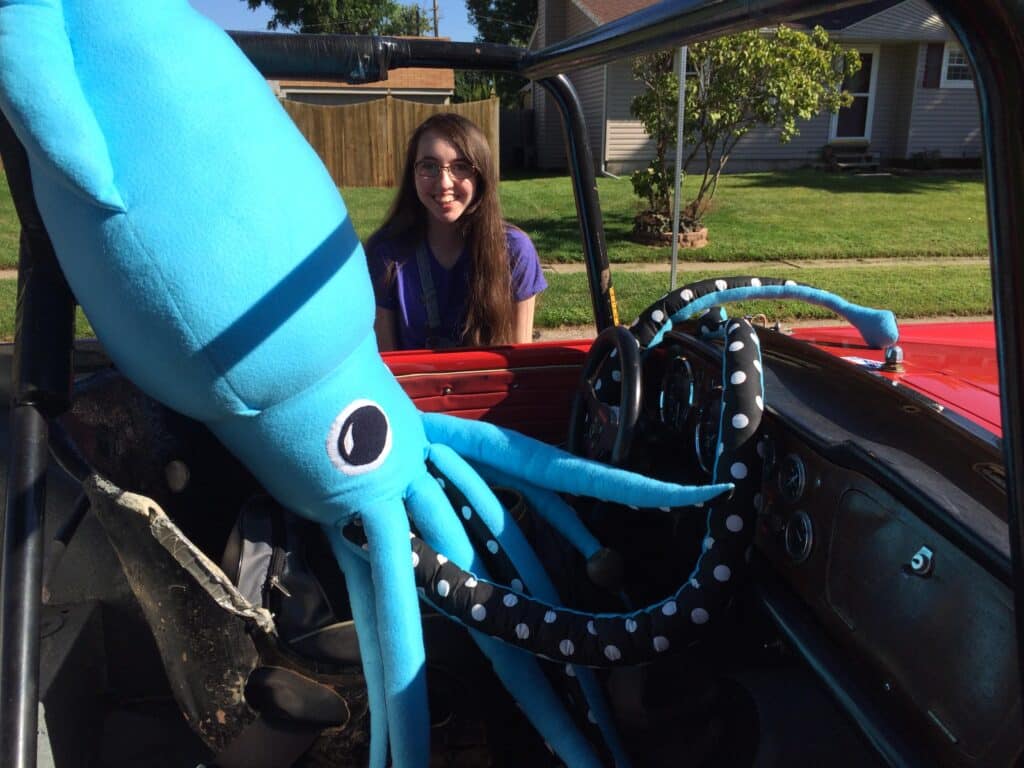 Carly with Heliogopoulos sitting in the drivers seat of Granddad Phil’s race car.

Phil has served in many volunteer positions for the region. He started by doing autocross registration.  After winning a National Championship in 1974 he became Solo Chairman.  He remembers being both a driver and Steward at Solo Nationals in Houston.  He says “there were so many protests we could have called it protest nationals!”  In retrospect Phil understands better now you got to pick one job or the other, you can’t both drive and steward effectively at a national event.  Phil was elected and served two terms on the NER Board of Directors.  When reminded that his name appears as an author of the region’s current operating manual, Phil recalled working with Ted Goddard, Kit Caruthers, and Mark Rerick, saying “I think it was the four of us that wrote that.” Joanna Ellis was the elected Region Executive (RE) and she collaborated. 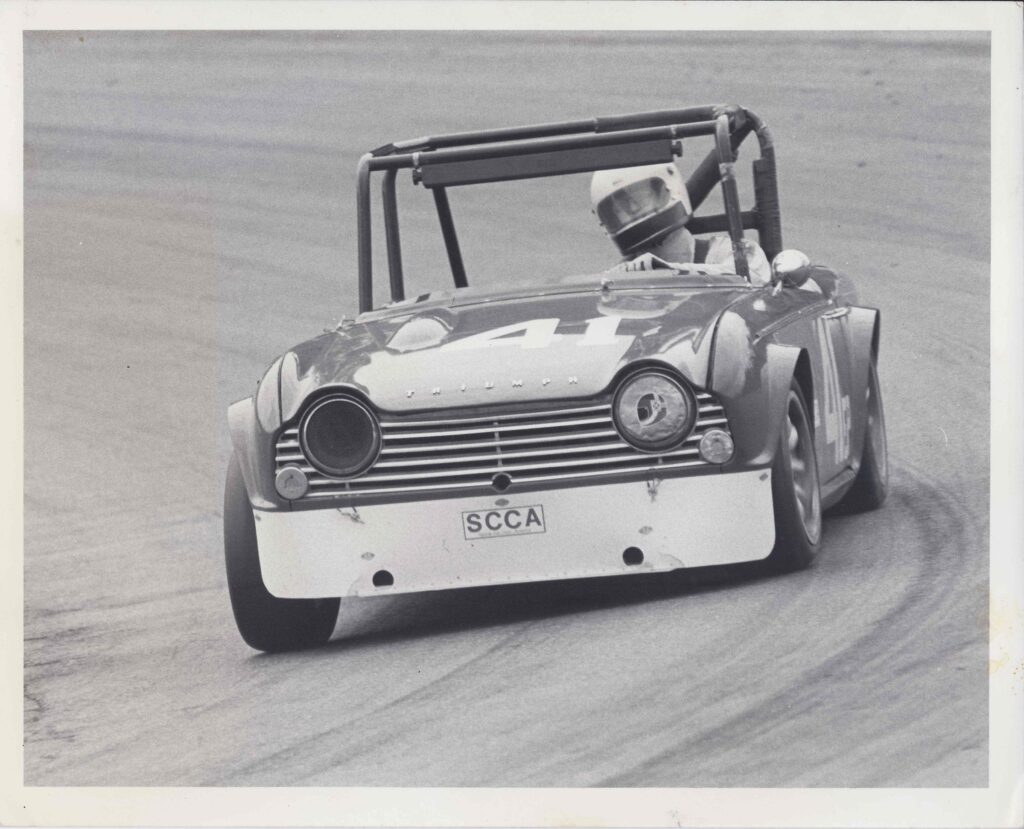 To celebrate the SCCA’s 50th anniversary the 1976 NeDiv Championship solo event was held at Bryar Motorsports Park.  There were 3 different course layouts and in this is a photo Phil is driving his TR3a in the bowl, going backwards compared with how it’s driven these days.

Phil also remembers serving for a year or more as the Northeast Divisional Licensing Chairman.  Phil says “Dick Patullo has that job now, but I’ll repeat a story I shared with Dick.  My family went on a long vacation and when we returned there was a stack of driver’s letters requesting an exception to the rules, hoping to keep their competition license active.  At the time, Divisional Licensing Chairman also had to sign off on every novice driver’s application.  Unbeknownst to me, in the middle of that stack was an application from Michael Andretti for his new license.  You know sometimes when you get back from vacation these volunteer assignments aren’t the top priority.  We were sitting down for family dinner when the phone rings.  It’s Mario Andretti calling, he’s very polite, very much the gentleman.”  Mario tells me “you know my son sent in his license application a couple weeks ago and we’re anxious to hear the status.”  Phil explained he had been on vacation and said “let me go check and see if I’ve got it.”  Mario responded “oh, I hope you had a great time, where did you go, what did you do?”  After chatting a few minutes, Phil told Mario he’d found Michael’s application and it would be in the mail next day to SCCA headquarters.  Mario cordially thanked him and Phil says “that was the one time I talked with Mario Andretti.”  This story illustrates when you serve others, you never know who you might meet, talk with, or what new doors might open!

Even now after Phil has transitioned into vintage racing with the Historic Racing Group (HRG), he still gets to have #FunWithCars while spending time with his family.  Phil has shared red Triumph with son Dave in multiple autocross seasons.  As the old saying goes, ‘the acorn doesn’t fall far from the tree’ and now Dave, together with his mother, have purchased the ex-Bill Throop TR4a.  It’s a distinctive looking car in British racing green with colorful stripes.  Phil and Dave enjoy working together on their vintage race cars plus having spirited competition on the track.  Phil and Dave drove together in the Club Racing Experience (CRE), and siblings Becky and Dave drove together in another CRE.  Having #FunWithCars continues to be a family affair when Phil, Becky, Dave and Carolyn all enjoy autocross competition, sometimes sharing their cars at events.  We’re betting it won’t be long before Phil’s granddaughter Carly wants to drive her grandfather and/or her father’s race cars too! 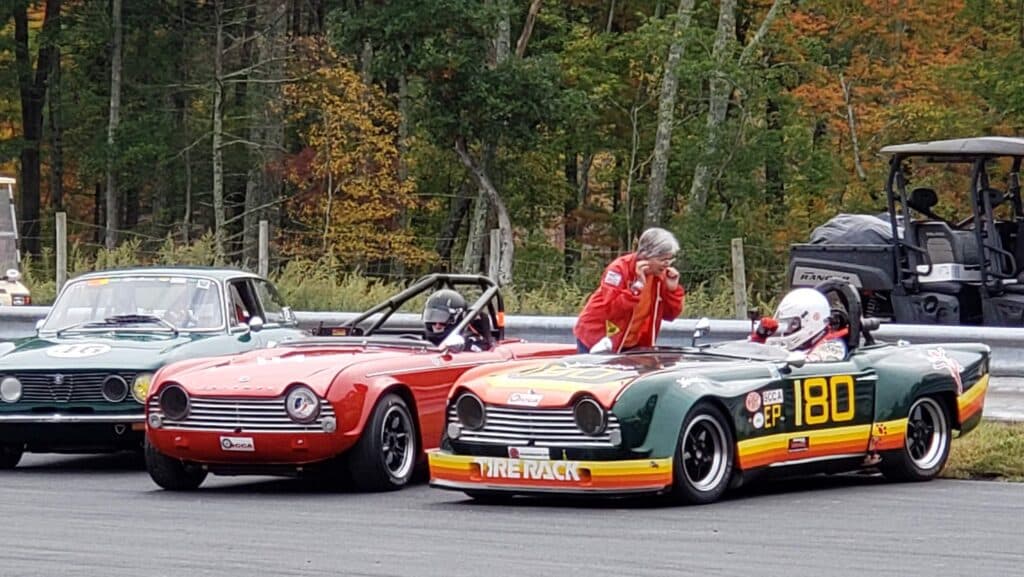 On the false grid at Thompson sitting next to son Dave in the ex-Bill Throup Triumph. The green TR4a with stripes is owned by Dave and his mom Joanna who is standing between the cars. That’s Bill Shield’s #46 Alfa Romeo in the background.  The car is similar to the ones driven by Dave Ammen and Gary Rutherford back when Phil was one of their crew. 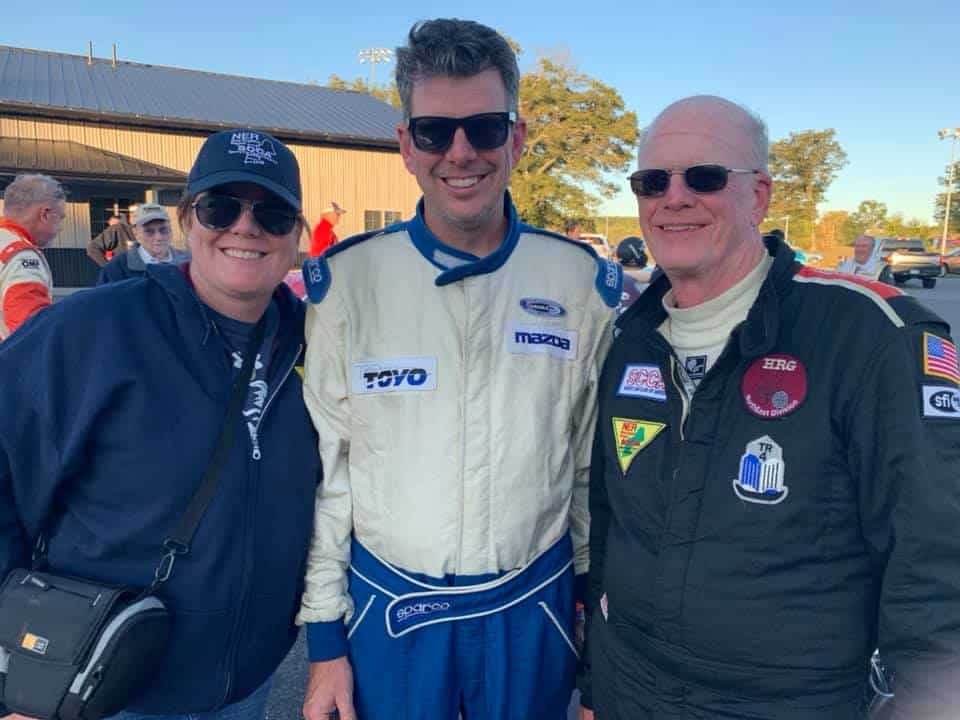 Beck, Dave and Phil together in the paddock at Thompson.