Skip to content
Home|Featured, Racing Life|This Woman Can Do It All!
Previous Next

This Woman Can Do It All!

Jennifer Ferreira is a great example of one of our newer club members in the New England Region (NER). She is an experienced road racing competitor, with club racing wins, recipient of the ‘Ma & Pa Philbrick’ Worker-of-the-year” award, and recently elected New England Region SCCA (NERSCCA) board member. Jennifer actively volunteers in many areas to help run the local club and its events!

Born in Manchester, barely 30 miles from New Hampshire Motor Speedway, Jennifer attended public schools in nearby Londonderry, received undergrad and graduate degrees at Massachusetts College of Pharmacy (MCPHS) in Boston, and now lives in Milford, NH with her partner Abhi Ghatak. Jennifer is a New Hampshire state certified and licensed Physician Assistant (PA). NERSCCA benefited from her medical expertise during the pandemic with guidance and advice on policies and best practices.

When asked about her career choice in healthcare, Jennifer tells the story of breaking her arm as a teenager. She thought orthopedics might be an interesting career choice and shared her interest with the doctor. Her orthopedic surgeon asked if Jennifer intended to continue karting and she replied emphatically, “Yes!” The doctor suggested Jennifer follow his PA around to learn about orthopedic patient care. The doctor’s intentions were clear, he was trying to demonstrate how Jennifer could work in healthcare and still be able to compete in motorsports. 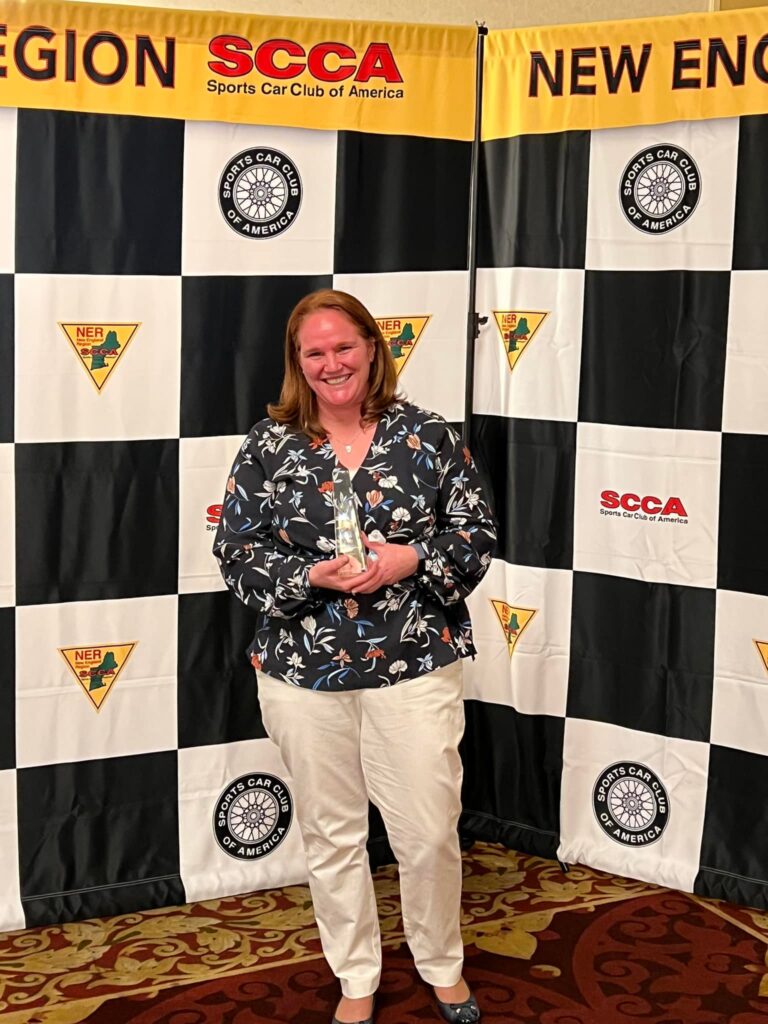 Jennifer joined the Sports Car Club of America in 2017. She raced enduro karts for more than two decades along with her father, so it’s not surprising she initially moved into Formula Vee like him. Jennifer then branched off into racing SRF on her own. History shows her grandfather raced stock cars back in the day and relatives owned and operated the Seekonk Speedway for many years. It’s not a big stretch guessing Jennifer was born with a motorsports competitive passion in her DNA. As the attached photograph proves, Jennifer has been comfortable sitting in the driver’s seat since she was a baby! 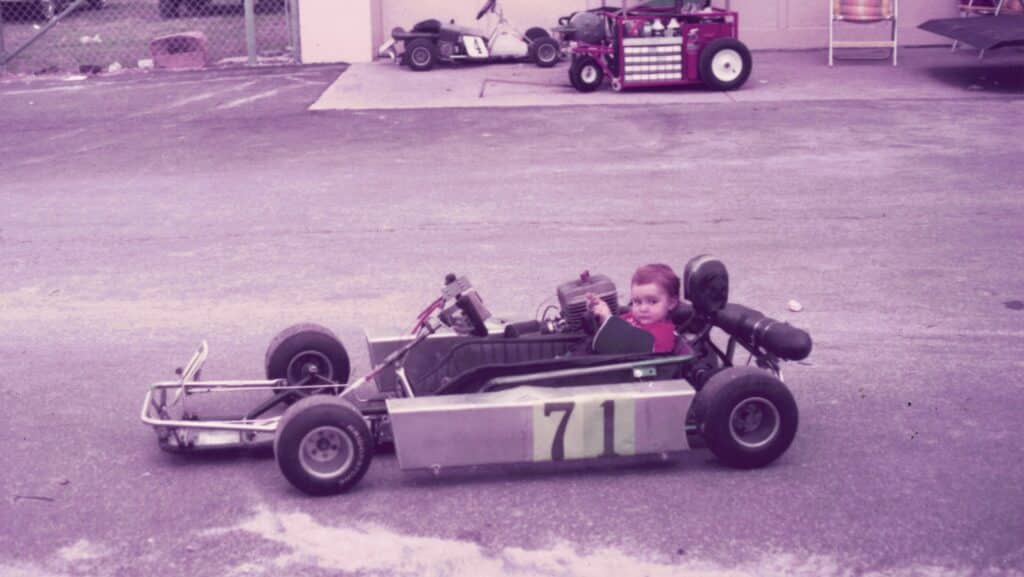 As a teenager Jennifer raced enduro laydown karts initially with the Italian All Kart team and afterwards with L.A.D. Specialties in Illinois. During more than twenty years racing enduro karts, Jennifer learned to drive the fast line and turn a wrench taking care of her own race equipment. Jennifer says “I bought my Formula Vee (FV) in 2015 and it just sat in the garage for two seasons because I was nervous about starting.” She continued, “I’m actually really shy and I didn’t know anybody.” Her partner urged her forward suggesting this car needs to be run! It was then she met the late Paul Faford, a veteran FV racing driver, who helped her get started.

When asked how she got her SCCA competition license, Jennifer said “I did the three-day Bertil Roos race driving school in a Formula Ford at New Jersey Motorsports Park first. Then I did the open wheel driving experience (OWDE) at New Hampshire Motor Speedway in my Formula Vee.” She remembers her instructors were veteran open-wheel club racers Jon Von de Car and John Petillo.

Moving into SCCA road racing seems like a natural evolution from Jenn’s youthful kart racing experiences. Both enduro karts and Formula Vee have laid-back, center-seat, open-cockpit driving positions, so it wasn’t too difficult learning the new race car. That not to say the change over from enduro karts into Formula Vee wasn’t without other new challenges. Even though both are momentum cars, the FV has three pedals and a transmission! She didn’t know how to shift gears, but Jennifer gratefully says “the Formula Vee transmission was very forgiving!”

Moving to the older engine powered SRF, a boxy closed wheel, center seat, open cockpit felt totally natural. Following several years of racing SRF, last season she won races and garnered fast lap in five races. Her success resulted in finishing the SRF class championship in second place. She finished behind Mark Saviet, who she compliments by saying, “He is a great driver and he’s got expert race craft.” She jokes with Mark telling him “You have been racing competitively for longer than I’ve been alive!” Jennifer declares “I used to think I just wanted to win a race, and now that has happened, I want to win a championship!” 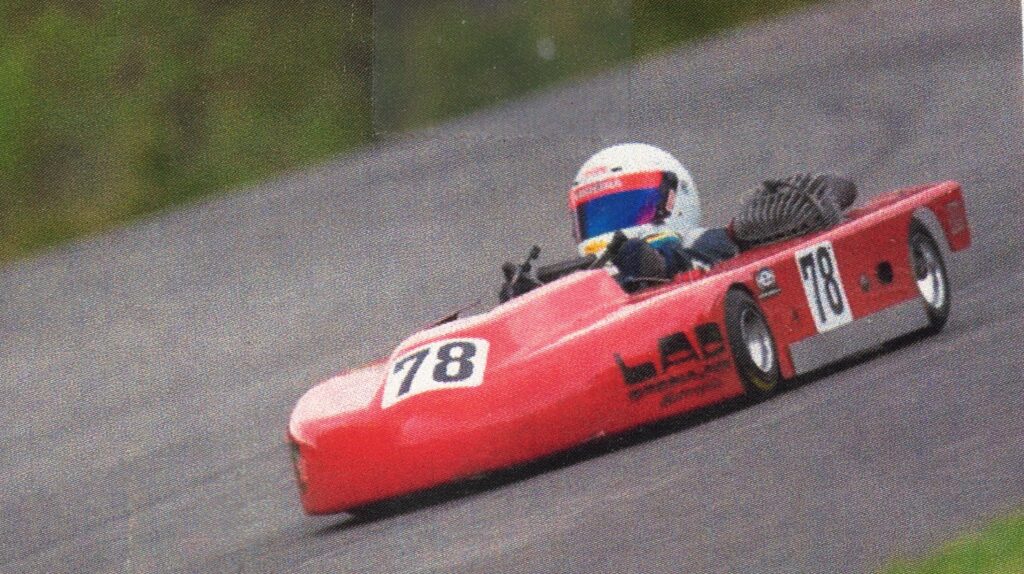 Working in healthcare these days means Jenn’s free time is a scarce resource. Her SRF now receives race prep and on track support from Motion Dynamics (mdracing.com) in North Conway, NH. To improve her odds in the 2022 NERRC championship competition, Jennifer plans to race her SRF and double dip in the ITR class racing a 3 series BMW prepared by Dave Maynard of 3D Auto in Hudson, NH. The BMW E36 is an ex-Turner Motorsports pro race car. Jennifer says with giddy excitement, “this will be the first time I’ve ever raced a car with a roof!” 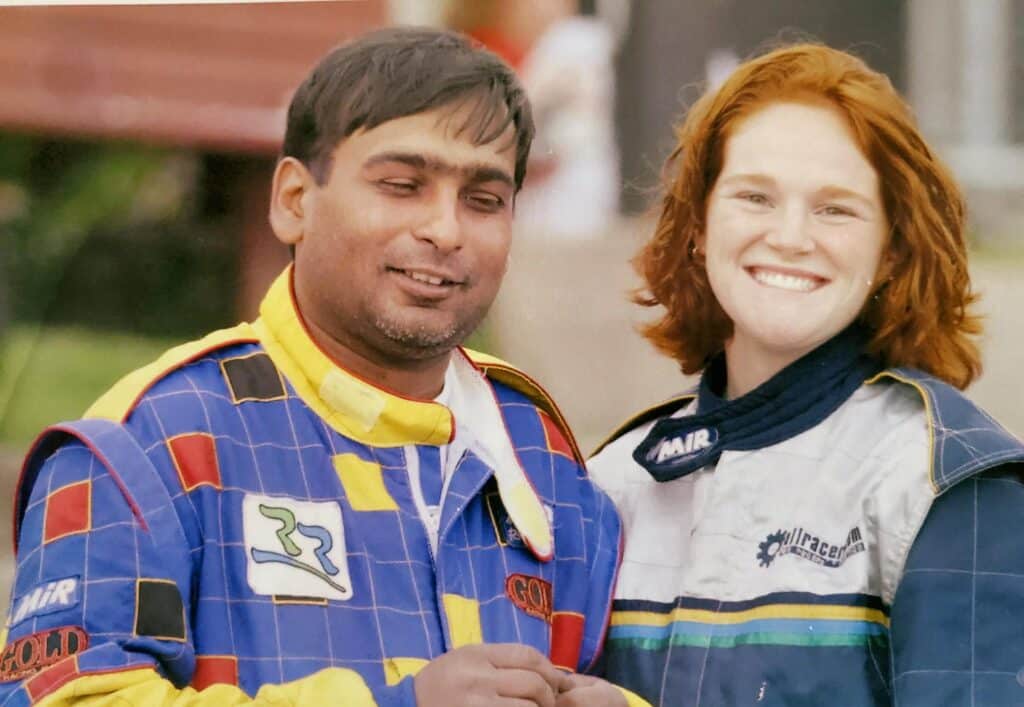 Jennifer has been volunteering since she first became a member and started racing Formula Vee. She says back when she was karting, it always felt like a big family and she knew everybody. Upon first joining the SCCA she didn’t feel like she knew anybody except her father John Ferreira and partner Abhi Ghatak. Both men introduced Jennifer to lots of people. She first met Laura Ukn (aka Blossom in grid) and Peter Villaume (aka Thumper in safety). She helped Thumper in safety first and then helped on grid with Laura. When asked how difficult is it to be a racer while also volunteering she replied “it’s actually not difficult, to me it’s just like hanging out with my friends between races.” She added that when she volunteers for Majors race events, she dedicates the whole weekend to working grid or being a steward-in-training, because her older SRF races in a region-only class.

When asked what appealed to her about becoming a steward, Jennifer said, “It’s true most competitors don’t want to be called in to talk with the stewards.” She further explained her desire to become the approachable kind of a steward who is diplomatic, listens well, hears both sides of a story, and helps others reach agreements so no one has any hard feelings. When she first looked into the steward-in-training program Jennifer discovered that not many stewards were active drivers or have been drivers. She felt her driving experience might help and believes the club needs younger members to take on steward roles and responsibilities.

Jennifer understands most race drivers have no idea how much volunteer effort goes into planning and executing a race weekend. She says, “I think every driver should volunteer in a specialty for at least a half day.” Drivers could most certainly benefit from their volunteer worker experience and the club needs more members’ participation. Since joining the club Jennifer has volunteered in various specialty areas (Grid, Medical, Pit, & Start) and she says, “I want to visit them all again from the perspective of steward-in-training.” She goes on saying, “There is an incredible amount of detail and I can’t put into words all the work behind the scenes that goes into putting on a race weekend. As a race car driver, too many of us just take it for granted.”

It’s easy enough for Jennifer to volunteer on grid during sessions when she’s not competing. But the steward-in-training program requires a bit more time and coordinated effort. She recommends drivers interested in following her path recognize the commitment required and find their own pace while doing the SIT program.

Jennifer remembers the advent of Title IX legislation where everything in male sports had to be equal for female sports. As a youth she remembers playing on a lot of boy-oriented sports teams. In kart racing she liked how once the helmet goes on, she wasn’t treated any different. She was just another one of the drivers on track. Karting classes don’t differentiate on gender. 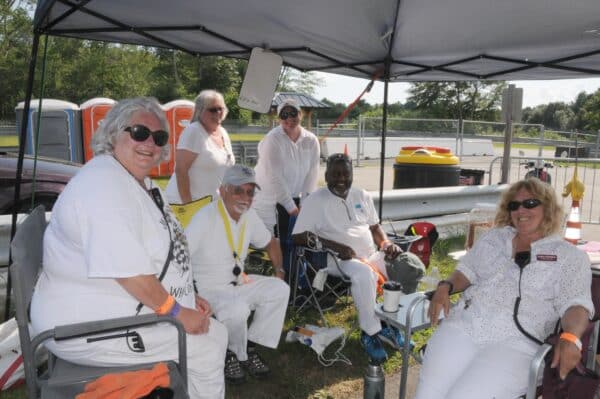 Acknowledging the fact that autocross/solo has women only classing, Jennifer wondered if that might not be why that specialty has more women competitors driving and winning championships? Jennifer attributes her road racing aspiration to her father’s significant kart racing involvement when she was young. He brought her along in the sport and always supported her kart racing. Jennifer remembers as a youngster racing junior karts when some parents would ask “why don’t you go play tennis or softball?” Jennifer doesn’t believe these parents would have ever suggested their sons go play soccer or football instead of racing.

Jennifer says she started driving karts because she wanted to race and her father was supportive. She points out she started driving thirty years ago, but women in motorsports was less common. Today parents might see a woman racing in the FIA’s new W Series and think maybe that’s something their daughter might want to do. Jennifer thinks both the W series and SCCA’s Women on Track (WOT) initiative are great ways to open motorsports up to women, something that previous generations of women never had available.

She mentions Janet Guthrie and Lyn St. James as the only women drivers Jennifer could looked up to as a young racer. Jennifer has both women’s books and remembers both women writing about how difficult it was to get into racing. In one story Janet Guthrie wrote that when she first raced at the Indy 500, there were no women’s bathroom for drivers. 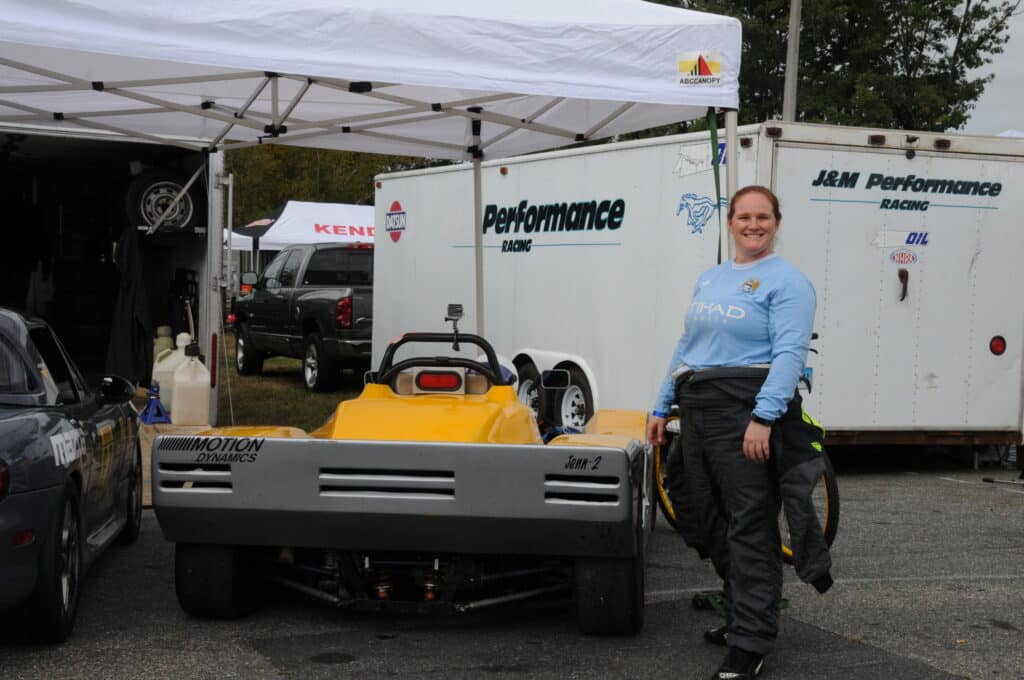 Jennifer remembers racing karts at Daytona where she was changing clothes in the women’s bathroom. A little girl noticed Jennifer in her driving suit and asked her mother “can I get her autograph?” The little girl had never seen a female driver before! Jennifer modestly signed the girl’s program book and Mom took a picture of her daughter posing together with Jenn. Jennifer says “It’s amazing how far it has come for females involved in motorsports, but I think we are still largely behind where we need to be.” As just another sign of how far behind we are still, Jennifer notes she is the only female SRF driver in New England.

We can all look forward to seeing Jennifer race both her old SRF and ‘new’ BMW this season, and wish her best of luck in the upcoming championships. Don’t bet against this woman driver winning two championships (SRF & ITR) in 2022! 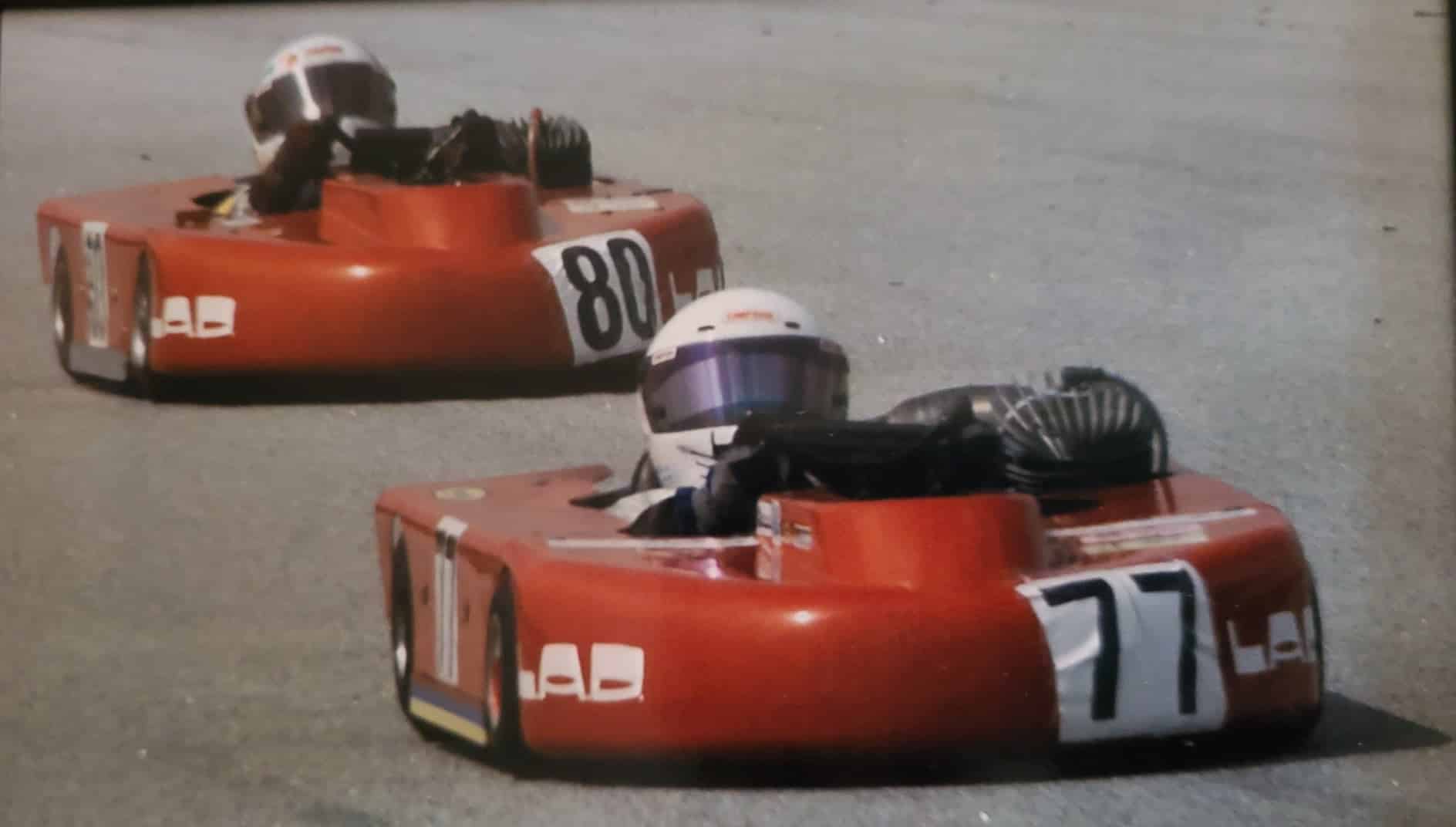 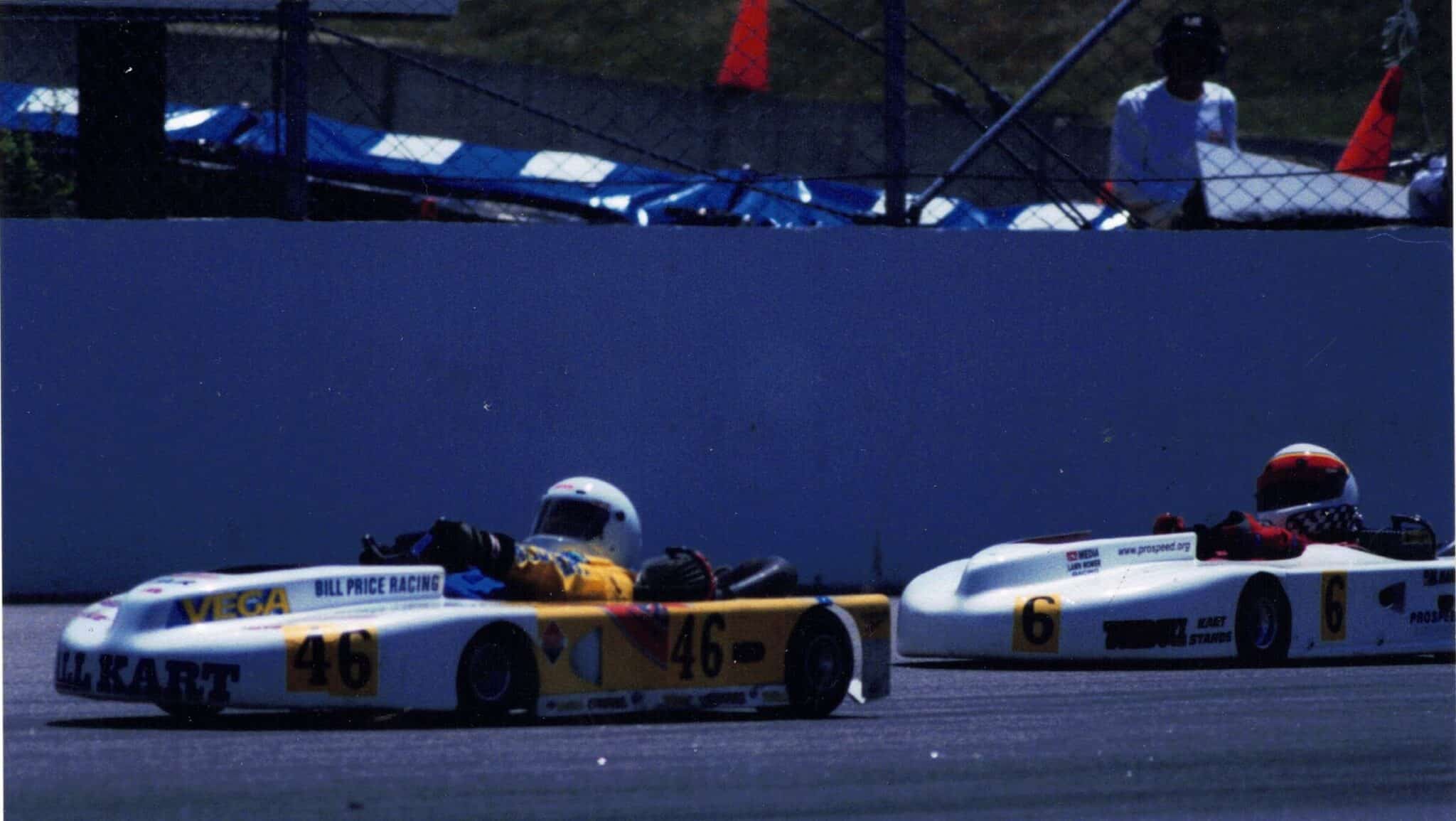 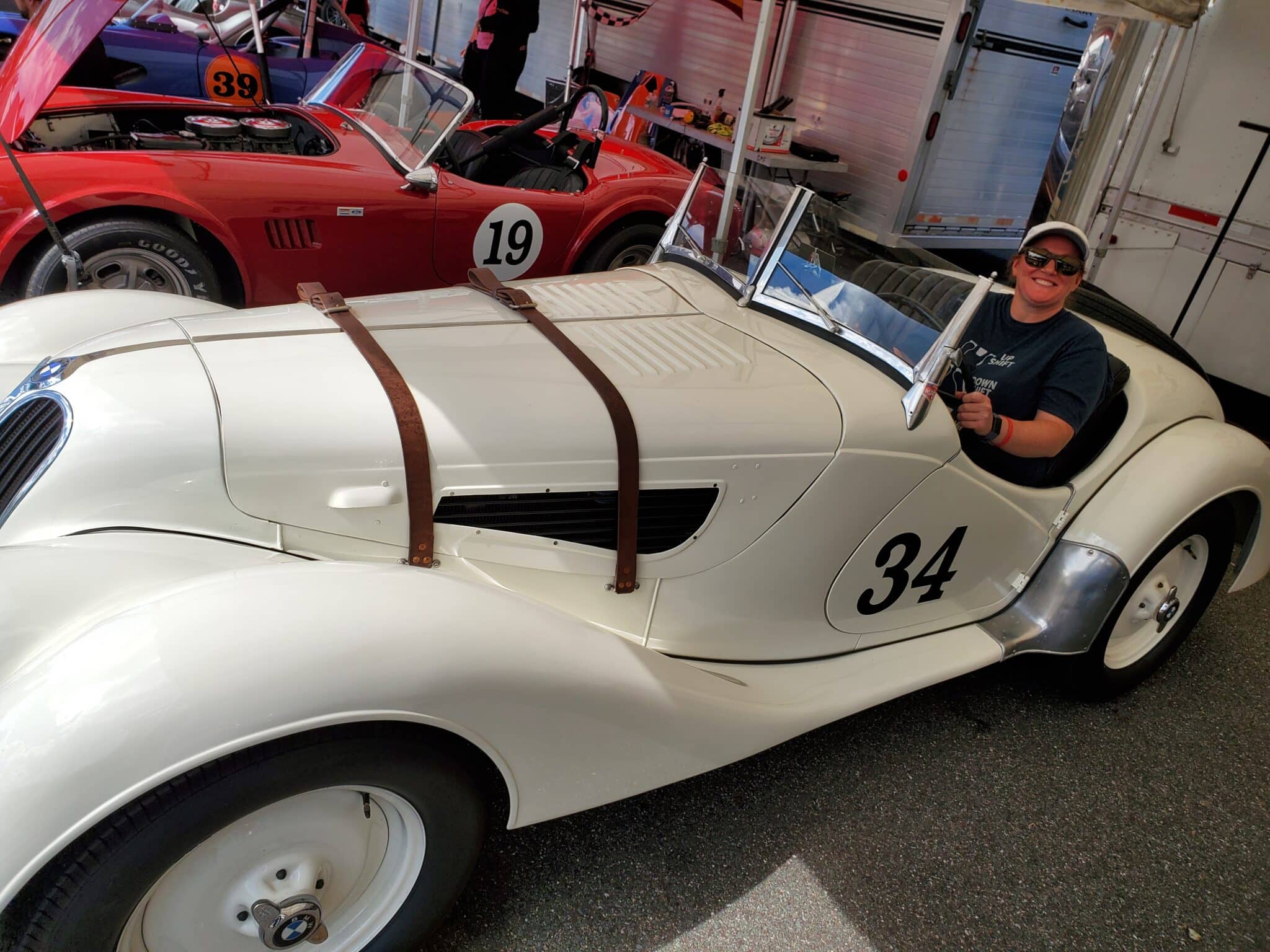 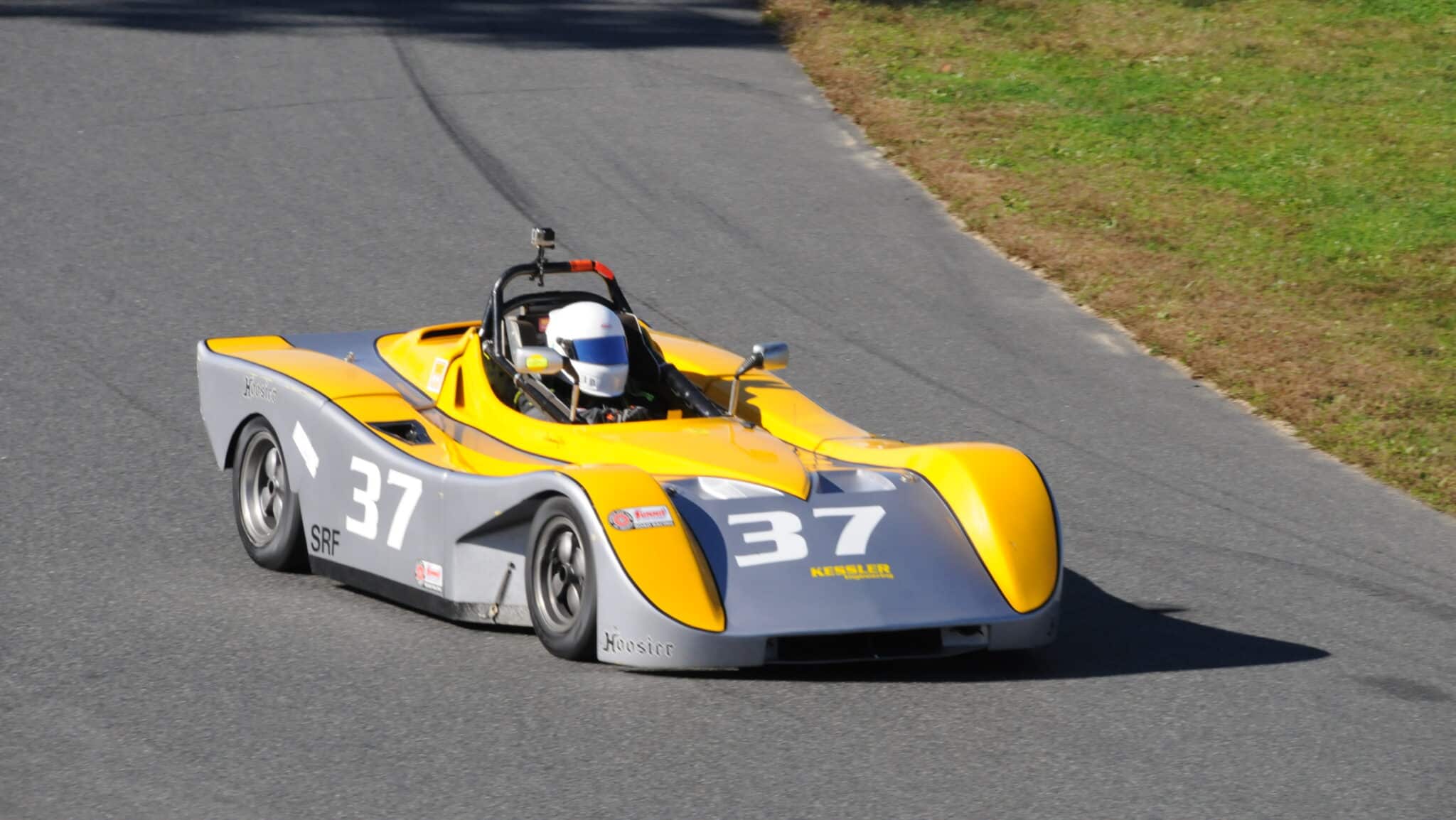 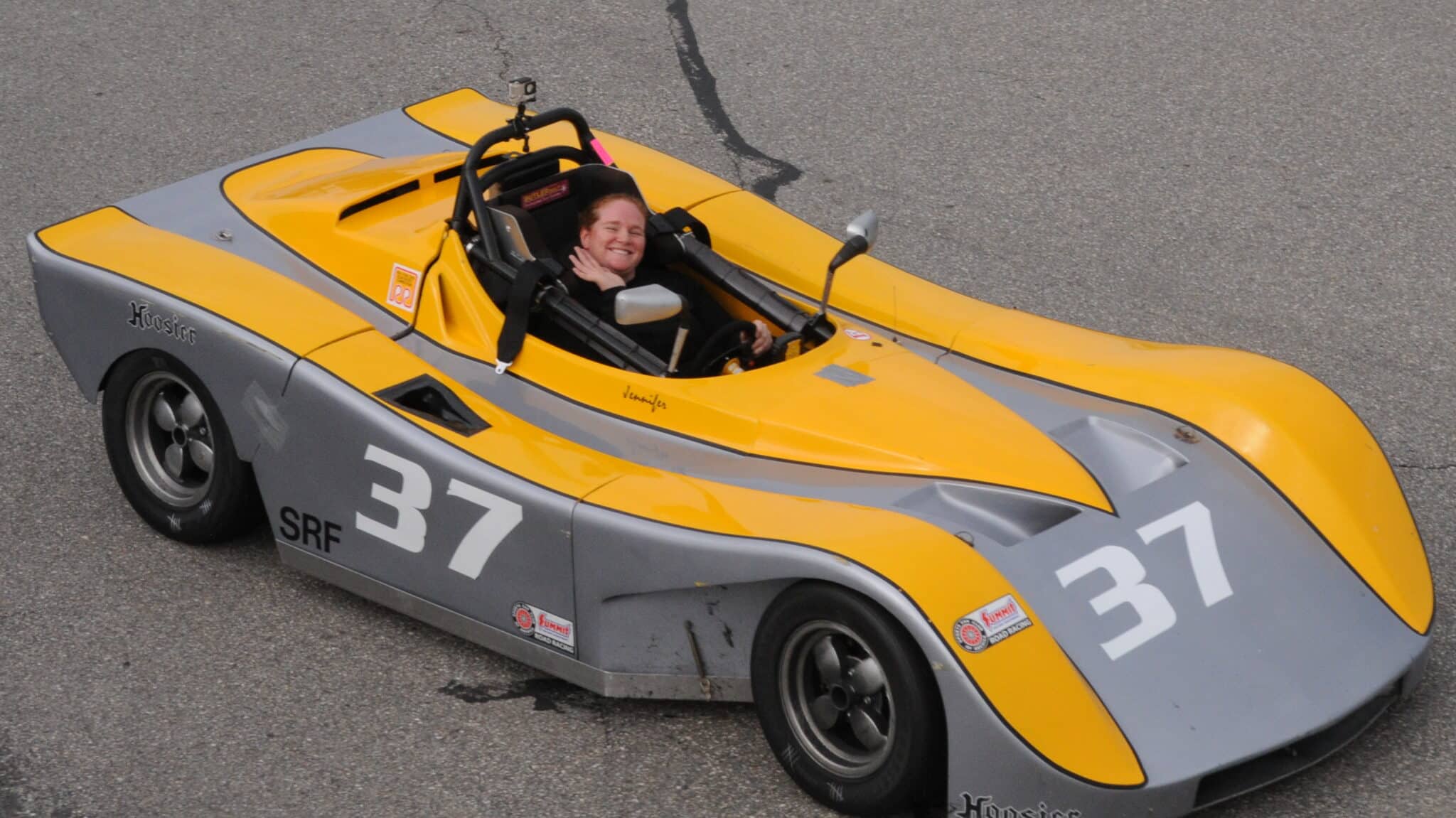 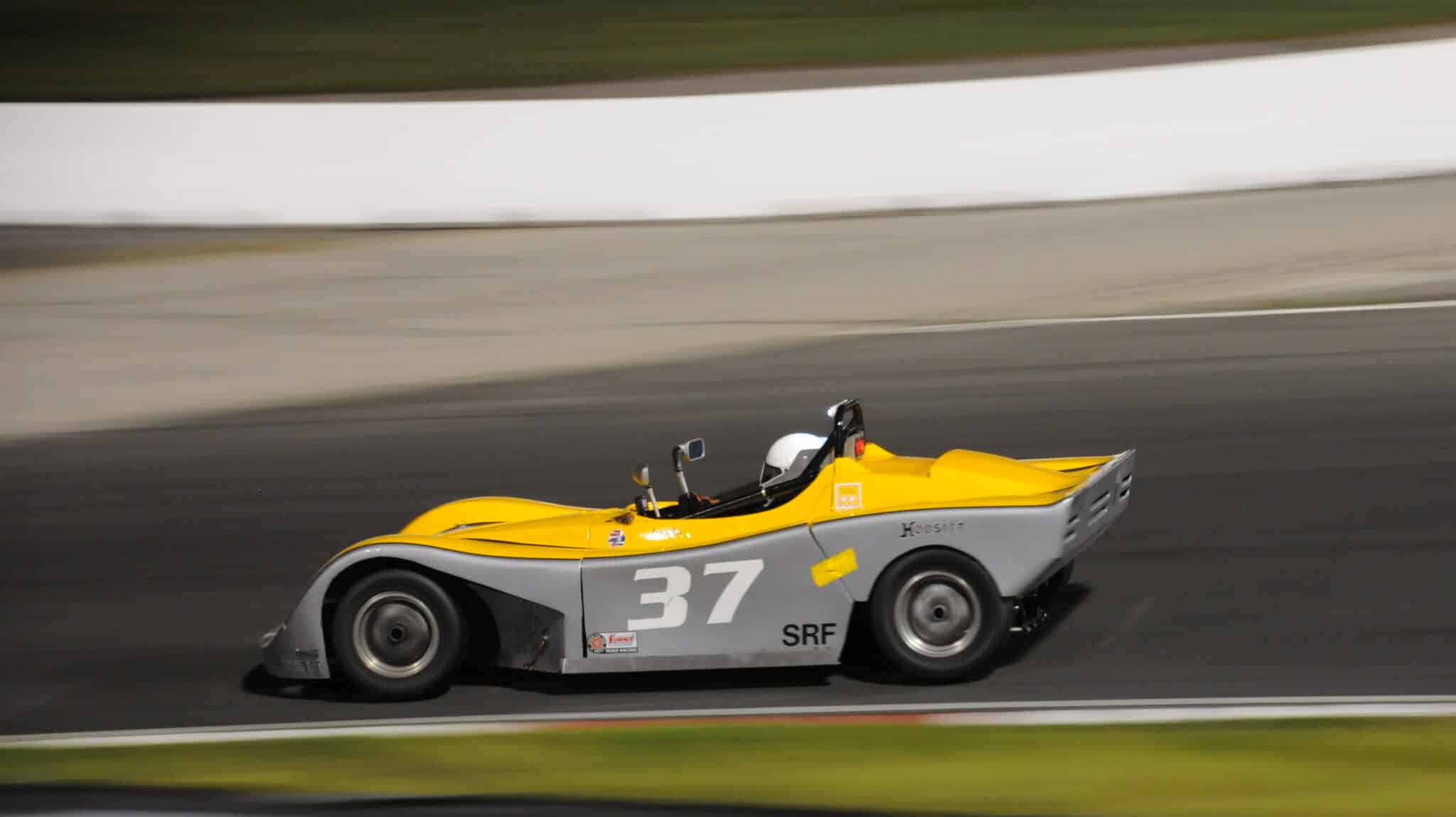 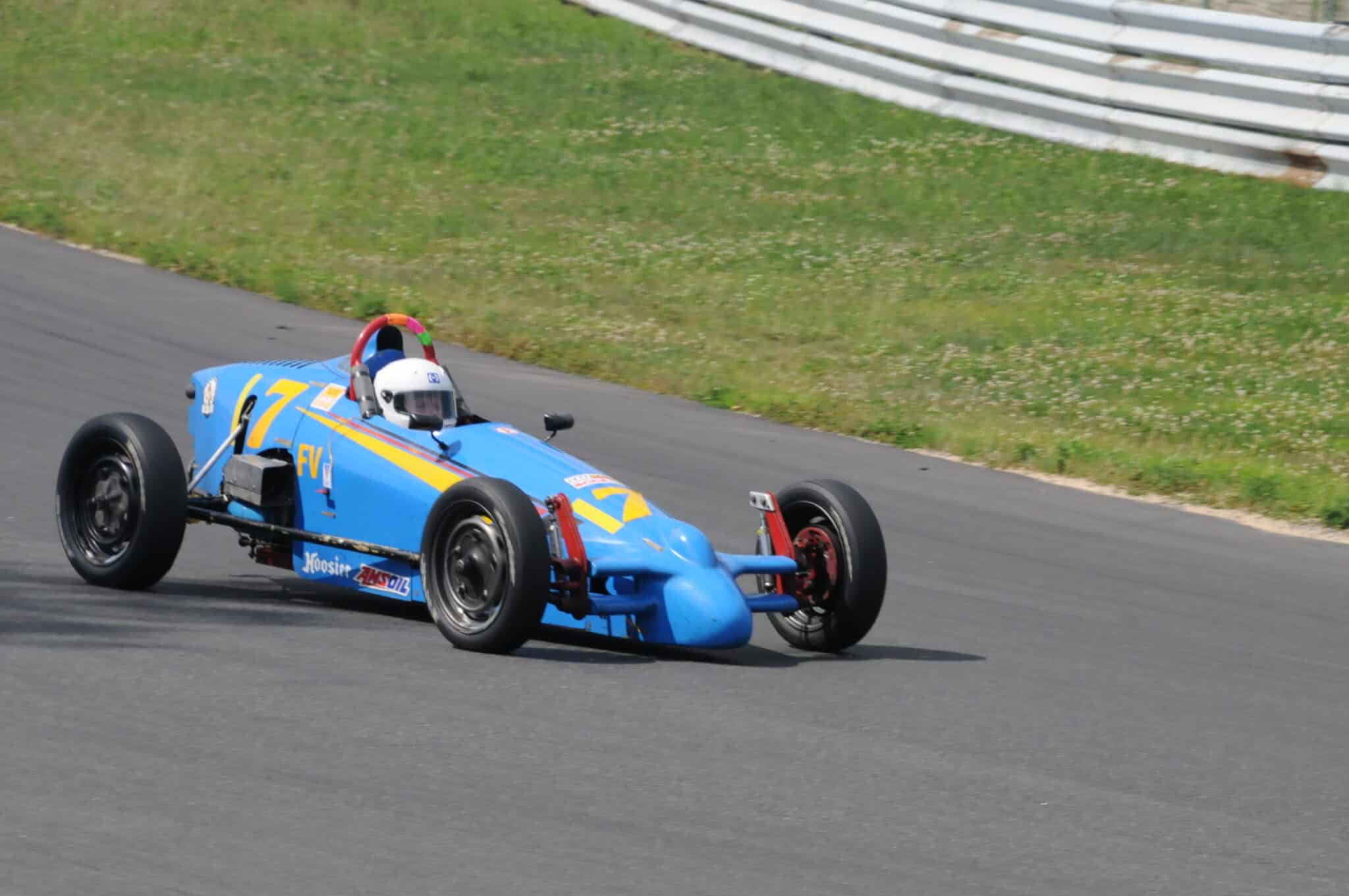 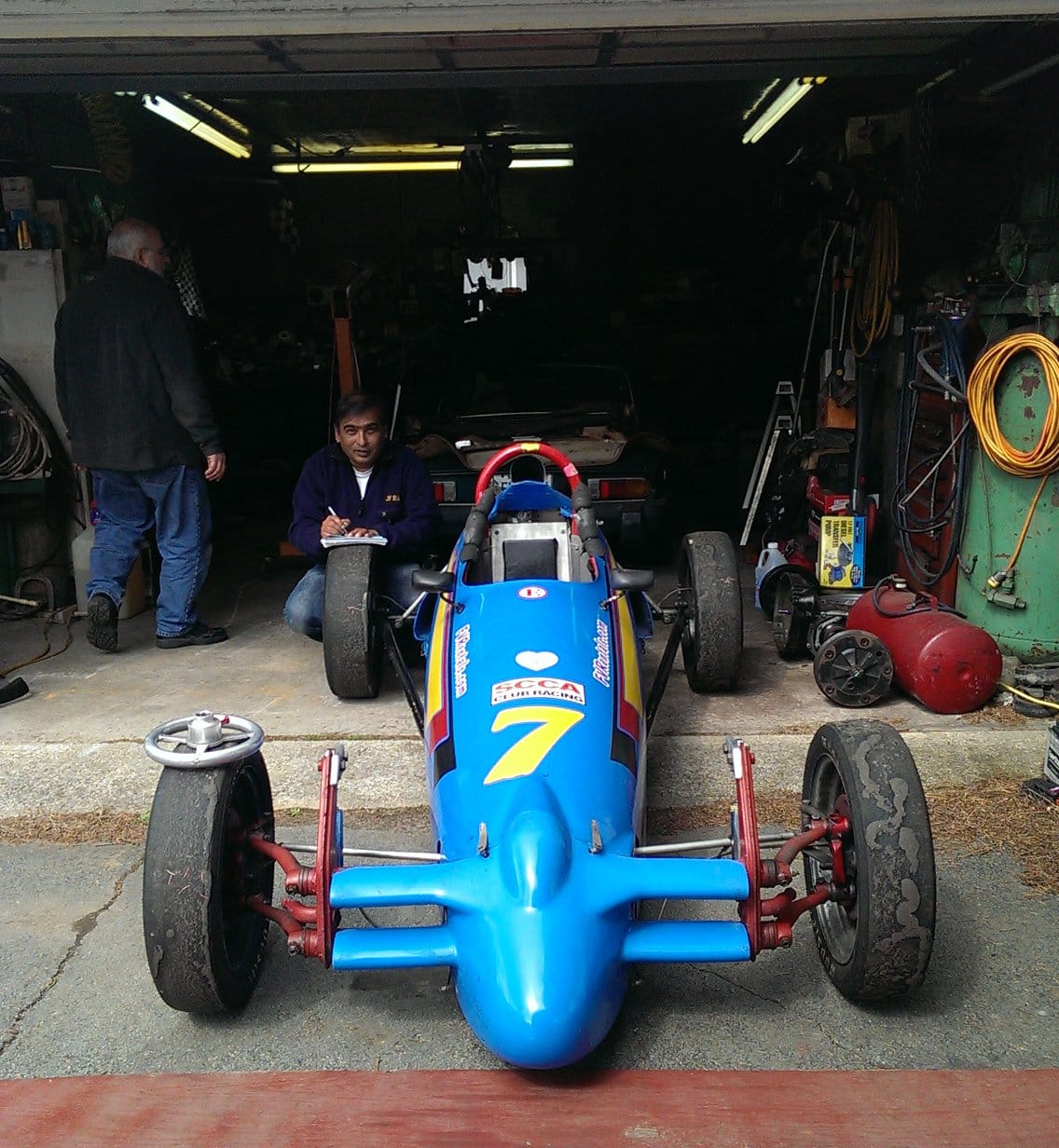