Skip to content
Home|Rally|‘19 DirtFish RallyCross Championship: Who Will Win
Previous Next

‘19 DirtFish RallyCross Championship: Who Will Win 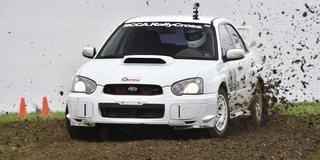 The 2019 SCCA® RallyCross® program concludes September 20-22 with the DirtFish SCCA RallyCross National Championship taking place at the National Balloon Classic Memorial Balloon Field in Indianola, Iowa.  Morning fog, midday sun, and the possibility of looser dirt in the afternoon always makes for a challenging event.  A potential for fall showers makes this an even more challenging event to predict RallyCross National Champions.

The SF battle royal between Chang Ho Kim in his Acura Integra Type R and Donald Carl in his Plymouth Neon ACR is on again this year. The pair have accounted for three of four SF championships since 2015, with the edge to Kim at two. Carl lost the championship last year to Chang in a heartbreaker following a cone on his final run. Don’t expect him to make that mistake again. Keith Lightfoot is also back in his Fiat 500 Abarth and has been consistently in the trophies over the last three years. There is one old face in a new place; five-time champ Warren Elliott has stepped out of his Mitsubishi Evo and into a MINI Cooper S.

2018 SR champ Ryan Miles and runner-up Sean Grogan are absent from the entry list this year, leaving SR wide open for someone to win their first national championship. Logan Altmyer found some lost horsepower in his Nissan 240SX and dominated the Dixie Championship. But the mid-engine cars are invading the field once again. Joey and James Green are sharing a Toyota MR2, while Sean Forthun and Nathan Witt will be co-driving a Porsche Boxster. The sleeper pick may be John L. Voegeli, who took the final trophy last year in SR.

SA’s 2018 champion, ZB Lorenc, has decided to compete in Modified All-Wheel Drive for 2019 rather than defend his title. With him out of the picture, the competition to crown a new champion in the 22-car SA field should be fierce. The smart money will be riding on the Mitsubishi Evos of Jan Gerber and Peter Schafer, but the Ford Focus RS of Josh Armantrout should also be a factor. The difference between the three will likely be determined by who can stay off the cones. There are also a few odd ducks in the SA field, such as a Tesla P90D driven by Brandon Hurst. Also in the mix is 2017 and 2018 H Production SCCA Runoffs Champion Jason Isley.

The 2018 PF championship was decided on a flyer of a final run by Dave Capesius in his Dodge Neon SRT-4 over Robert Seelig in his Honda CRX. The 2019 championship will likely be a two-horse race again with Capesius eager to repeat. Harold Denham should be a good bet for a trophy in his MINI Cooper as should Jim Rowland in his Nissan Sentra SE-R, especially if he remembers to take his spare tires out of the trunk. It’s also nice to see Ron Foley back in the field at nationals this year.

The race for the 2018 PR championship will continue into 2019 with Myles Goertz and Shawn Roberts picking up where they left off in their respective Mazda Miatas. The pair handily outpaced the field last year with Goertz edging out Roberts by a scant 1.5 seconds over 10 runs. Watch for Katie Orgler in a Miata and Eric Adams in his Scion FR-S to fight for the final spot on the podium. Austin Dowda may also be in the running for a trophy after jumping from SR last year, where his 350Z’s clutch failed in protest of any further abuse.

This class is composed entirely of forced-induction machines, so these drivers will be hoping for cooler weather. Mark Macoubrie is back to defend his 2018 championship and is the frontrunner again in his Subaru Impreza STI. However, there is another Mark in the class who drives a Mitsubishi Evo. Mark Hill will certainly try his best to knock Macoubrie out of the top spot. Orion Fairman is also jumping into the PA fray in his STI after a decisive win at the Great Lakes Challenge. DirtFish RallyCross National  Championship newcomer Tristan Koivisto should be in the mix for a trophy, too.

Brett Hunter was untouchable at Indianola last year in his Honda CRX. But can he repeat? Jason Lang bested Hunter by staying clean at the Beehive Challenge in his Honda Civic Si. Lurking in the background is Andy Thomas, who may have the speed to throw a wrench into the Honda battle. Thomas had a decisive win in MF at the Great Lakes Challenge in a field which included Lang. A pair of lightweight Volkswagen GTIs driven by Alan Hoppe Jr. and Greg Mercier will likely round out the top of the field.

This class is full of variety and will be a wild one to watch. Brianne Corn is back to defend her 2018 title in her Mazda Miata, but she will have to fend off the likes of Vaughn Micciche in his Porsche 924 and Dan Hipwood in an MR2. Leon Drake has even jumped into this class with his latest rolling science experiment; a Subaru-powered Porsche 914 dubbed the “Porscharu.” Doug Leibman is also in the field with his tri-podding terror of a Volkswagen Super Beetle. Providing additional vintage flair in MR is Ron George in a 1969 Ford Mustang GT.

At 23 cars, MA stands as the largest registered class for the 2019 championship. The guard is also changing, with most of the folks we’re used to seeing in MA moving on, so there will be some new names at the top of the results. Jason Fuller won two of the Challenge events this year in his Subaru Impreza WRX. Todd Briley won the other in his Impreza STI. Kent Hamilton is trying his hand at AWD in another Subaru. Lothrop Withington IV was a close third last year in his Mitsubishi Evolution. Last year’s SA champ, ZB Lorenc, has also jumped to MA in his Impreza STI. This class is anybody’s guess.

As SCCA’s most widespread and readily accessible form of extreme motorsport, RallyCross is a scaled-down version of a rally stage laid out on a non-paved plot of land where the course is delineated by traffic cones instead of trees or rocks. Participation requirements are considerably less than those associated with other forms of performance rally, so drivers usually only need a mechanically sound, hardtop vehicle and a helmet to come play in the dirt.