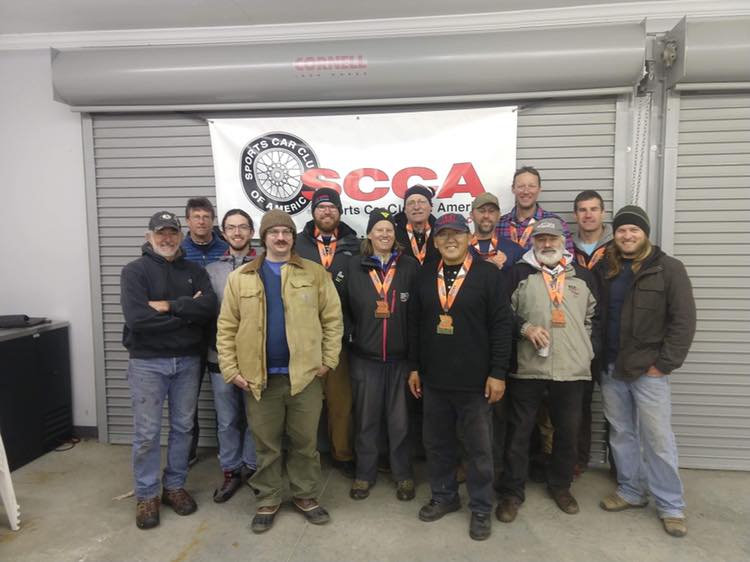 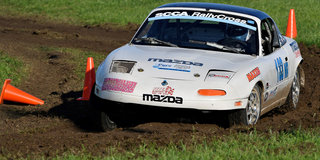 INDIANOLA, Iowa (Oct. 14, 2018) — The 2018 DirtFish SCCA® RallyCross® National Championship concluded with familiar and new drivers taking home bragging rights and hardware. Back on familiar ground at the National Balloon Classic Memorial Balloon Field, dry weather and a little Saturday sunshine created favorable racing conditions. Racers were also treated to three distinct courses, two on Saturday and one long course on Sunday. Grip levels went up and times down throughout both days as competition dried and packed the terrain, creating several races that weren’t decided until late on Sunday. Strong competition and an eclectic mix of cars made for a great weekend of racing for competitors and spectators alike.

In Prepared Front-Wheel Drive, David Capesius and Robert Seelig battled non-stop from the first start on Saturday to the end of Sunday. The time difference after the first run was under two seconds and every run after that was considerably closer. At the end of Saturday, Seelig had the upper hand in his Honda CRX, but only by a mere 0.132 seconds. Capesius and his Dodge SRT4 made that up and more, coming away with the victory by 0.635 seconds.

Prepared All-Wheel Drive was a classic Subaru versus Mitsubishi contest. After six runs, Mark Macoubrie and his WRX STI were up by 3.599 seconds over Mark Hill in his Evo. Unfortunately, things went a bit south for Hill during Saturday’s last run. He picked up a cone while Macoubrie tacked on a couple seconds, resulting in a margin of 8.228 seconds. Hill wasn’t done fighting, though. On Sunday, he bested Macoubrie on every lap, first by 1.593, then 1.31 and finally 3.148. But it wasn’t enough and Hill came up short by 2.177 for the weekend.

Prepared Rear-Wheel Drive saw Miatas take the first three positions. Myles Goertz ran consistently all weekend with the exception of one cone and came away with the victory. Second went to Shawn Roberts who also kept things neat and tidy with no cones, but didn’t quite have the speed to match Goertz.

Stock Front-Wheel Drive was a close race between Chang Ho Kim and Donald Carl and wasn’t decided until the very last run on Sunday. Carl and his Plymouth Neon were in front by 2.353 at the end of Saturday. Kim kept pace on Sunday in his Acura Integra, but not enough to get out in front. On the last run, Carl tagged a cone, handing Kim the victory by 1.93 seconds. Kim credited his performance to the excellent grip of his Nokian tires, as well as the friendly competition from Carl.

Just like last year, ZB Lorenc was the class of the field in Stock All-Wheel Drive, finishing nearly 16 seconds in front with his Subaru Impreza. Second place went Jan Gerber in his Evo IX. Though he finished far out front, Lorenc noted the vast improvement in driver skill over the last decade, echoing a sentiment expressed by many drivers this weekend. “The talent is amazing, everybody is fast now,” Lorenc said. “You can’t hold back and you can’t hit cones.”

They say you can’t win on the first lap, but Ryan Miles almost did in Stock Rear-Wheel Drive. He piloted his Porsche Boxster to a 1.637-second margin ahead of Sean Grogan in his Toyota MR2. Grogan fought back, posting a couple times over half-a-second faster than Miles, but never making up enough ground, eventually coming in second by 3.335 seconds. Miles was quick to credit Grogan, saying, “It’s Sean that’s pushing the class to perform this well with such consistent speed and no mistakes.”

Bret Hunter’s victory in Modified Front-Wheel Drive will soon be RallyCross legend. His Honda CRX broke mid-run at the end of Saturday, but he managed to coast downhill to stop. It was quickly ascertained that it needed a good bit of repair, but it would have to wait as it was his group’s turn to work. Instead of waiting, two complete strangers stepped in while he was working and fixed the car. In return, he offered to take them out for a steak dinner, but they countered with homemade tacos. Hunter went on to win by 11.247 over Scott Carlson in his VW Golf. Carlson and his co-driver, Philip LaMoreaux, had a great scrap with just 0.831 separating them at the end of Sunday.

Modified All-Wheel Drive was a Subaru versus Mitsubishi versus cones scrum with Max Lawson coming out on top in his Evo. Lawson picked up one cone, but still managed to win by 4.638 over W. Orion Fairman, who hit two cones in his Subaru STI. Lothrop Withington clipped three cones, finishing 0.105 behind second and 4.743 out of first place.

Modified Rear-Wheel Drive wasn’t entirely a Mazda affair, with six makes duking it out for bragging rights. Brianne Corn and Vaughn Micciche had a race for two days. By the end of Saturday, it was clear Corn had some serious competition on her hands. She piloted Peter Dozeman’s Miata to a 2.217 lead over Micciche in his 1987 Porsche 924, but he had one cone whereas Corn had none. Sunday saw Corn up the ante with run margins of 2.463, 4.825 and 0.679, in the end taking home first by 10.184. Doug Leibman took home third in his crowd favorite orange 1972 VW Beetle.

The consistently challenging yet friendly competition of SCCA RallyCross was highlighted in this year’s DirtFish SCCA® RallyCross® National Championship. The SCCA expresses its thanks and gratitude to DirtFish, our hardworking volunteers and the participants for making this weekend such a success.

Class, winner’s name, hometown and car are as follows:

Words and photo by Greggar Helgeland