Skip to content
Home|Featured, Rally|Out of the ashes, into the mud: A rally comeback of sorts
Previous Next

Out of the ashes, into the mud: A rally comeback of sorts

Kris Gove shares his recap of the NER Joker Lap event from his blog at Slap Dash Racing. Check out his site here!

I was picking out nursing homes to host my Rally Retirement Party when my friend Bill Doyle texted me and asked me if I wanted to share his car for an event only a few days away. It was the SCCA Joker Lap RallyCross at the Canaan Motor Club New Hampshire. Sounds interesting, I said. My father raced there centuries ago – in a Ford Granada – when it was a short oval track.

Mixed tarmac and gravel? Turns left and right? This Saturday, no time to prepare? Sign me up. 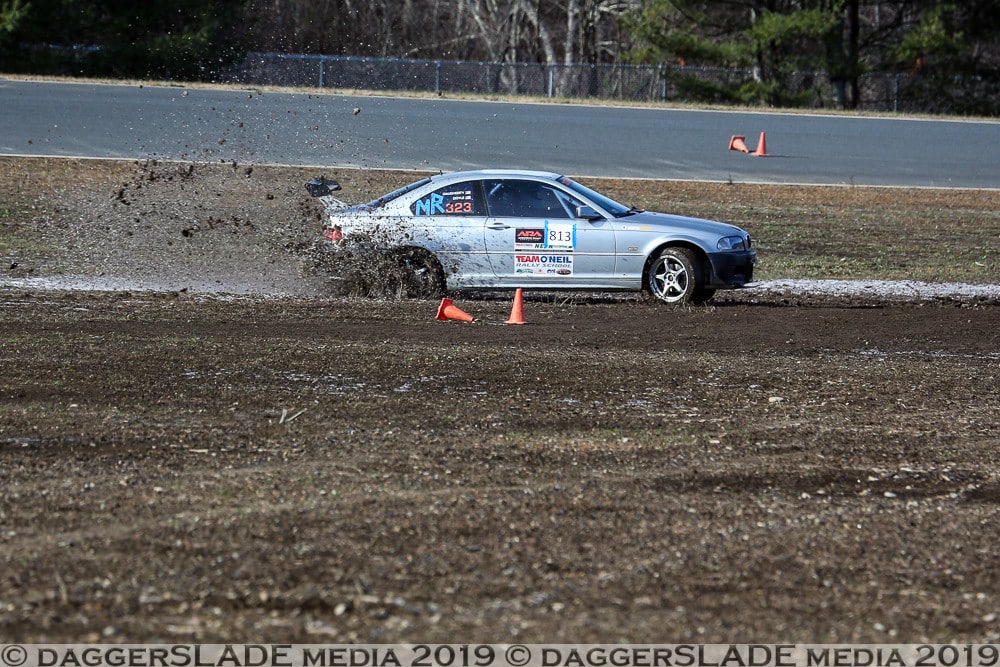 Truth be told, I’ve been a stage rallyist, whenever possible, for about nine years now, but I have never once competed in a RallyCross. When I first bought my car, I had it in my head that I was going to get hit by a bus before I got the chance to full-on stage rally, something that I’d been pining over since pre-Group B (yes, I’m that old). It wasn’t until a press trip to Team O’Neil Rally School in ’05 that I truly thought that this rally thing could actually be possible. More on that when the book comes out.

So I had only three tarmac-only AutoCrosses (only one of those SCCA-sanctioned) under my belt before jumping on stage, so this was my first-ever RallyCross. And let me tell ya, I had an absolutely phabulous time – and there were no magnetic trees in the way!

My first AutoCross was 10 years ago in the parking lot at Horseneck Beach in Mass, so I was a little rusty on the rules and had never had to switch drivers after every run. This was especially difficult for this event since Bill is a normal-sized human, while I am, uhhh, a little bit larger than a normal-size human. So at every driver switch, I would have to extricate myself and push my various blobs over the scaffolding on the inside of the car and strap in, all while Bill swapped our car numbers, caught up with friends, did his taxes, raked leaves, then got in on his side.

My First AutoCross. Circa 2010. Dig that orange loaner.

It’s been 2.5 years since my last New England Forest Rally in 2017, only a few months after my mother died of lung cancer. Don’t smoke, kids. Bill and I podiumed that year, my first time as a driver. Since then though, my car has been neglected during a triple move, out of my first house, into my in-laws whilst they were away in Florida, then into my new house, which I didn’t know was mine yet when I left my first house. Then my job got bananas, I adjusted to my new surroundings, did a quick first-time overlanding thing in my ancient Xterra, then I spent mostly all of this year nearly blind with cataracts. Yes, that’s also an old-person thing, but I’m not that old. But early cataracts are genetic. So I got new eyeballs. Almost the second they healed and medically cleared, Bill got in touch.

Next thing I know, I’m hurtling through the night to get from CT to NH as quickly as possible. I got lost twice – and I was actually following Bill. I’ll never know how this happened, but now I know my right proper place is behind the wheel with someone shouting directions at me from the Silly Seat.

In the group I was in, the pre-race course-walk talk was a little too X-rated for these pages, but let’s say just say that the nerves started a little tsunami battle in me ol’ noggin. I got a little jittery. Excitement bubbled. That’s when I knew my Adrenalizer was working. I thought it was broken after all this time. 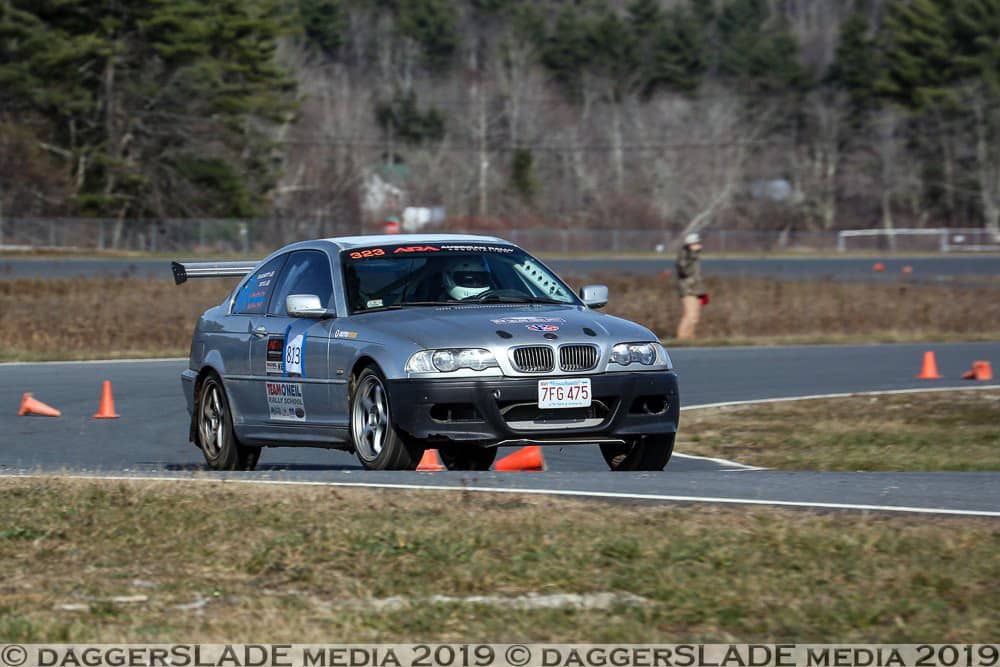 Bill Doyle and I flying the E46 BMW with the Jumbo Wing.

So they Play-Doh-Fun-Factoried me into the driver’s seat when it was my turn. The visor went down and all the moisture left my body. I rolled up to the starting fella who had very, very specific starting place requirements. I tightened my harness. Clutched in. Cinched gloves. Got the Go sign – and promptly stalled the car.

I restarted with anxious gusto and ripped away from the line. The key-on chime and all the lights on Bill’s dash looked and sounded like there was a leaky Titan 2 in the No. 7 tube in a silo somewhere deep below Montana. No matter, I POR’ed that shite like I was outrunning the Staties with a kilo of coke strapped to my leg and a dead hooker in the trunk. I must’ve taken that first turn at 6 or 7 mph. The nerves went away. My smile came back, even if it was like Jack Nicholson’s in The Shining.

As I bobbed and weaved and herked and jerked my way around the course, I discovered something very unique about Bill’s car.

Maybe more broken than my own rally car at home.

When I met Bill at his house the day before, he showed me the half-bald all-seasons we’d be using for the race. No matter, I said. My AutoCross tires were 12-year-old Pirelli snows (the steel belts showing through count as tread, right?).

The transmission sounded like someone threw a bag of rocks in a dryer.

Then, just about the time the driveshaft started hitting the tunnel, he tells me there are no sway bars. Well, there are, he corrected. They’re just not connected.

Then, just as I’m about to hit the dirt section for the first time, “Oh yeah, it’s an open diff. It’s spicier than stock. But still one-tire fire.”

I swear we Figure 8’ed three or nine times before I got to the finish line – at 2 mph.

But I tell ya, the mud section, the silt section, the glycerin-on-ice section, was like a whole nutha race unto itself. Like slow-motion Scandinavian Flicking. Just when I thought I would hit a cone, I’d let up and the car would ever so slowly rotate back, like doing donuts in a cargo ship.

As the day progressed, so too did the car’s thirst for cones. I’m pretty sure there are still three or four stuck in the wheel wells of Bill’s poor BMW. And rumor has it, Scott Carlson, one of the organizers of this wild affair, has put a hit out on me.

So Bill and I landed squarely in the middle of the pack at day’s end. But it didn’t matter. It was like my Rally Family were like drug dealers peddling adrenaline on Turn 1 and I was instantly re-hooked. Full needle chill. Bill, in his infinite generosity, offered to let me borrow his car for the December 7 RallyCross. But what he really did for me was inspire me to get off my ass and start fixing my own relic.

I have about a week, with a holiday in the middle, to finish about seven weeks of work. But I bought a set of snows and I’m inspired to rock.

So stay tuned, the Don’t Call It A Joker Lap RallyCross on December 7 and I’ll post a follow up, whether it’s from my car or Bill’s, which is now fixed – mostly.

Photos courtesy of the infamous Douglas Bolduc over at DaggerSlade Media. Many thanks!

About the Author: Kris Gove