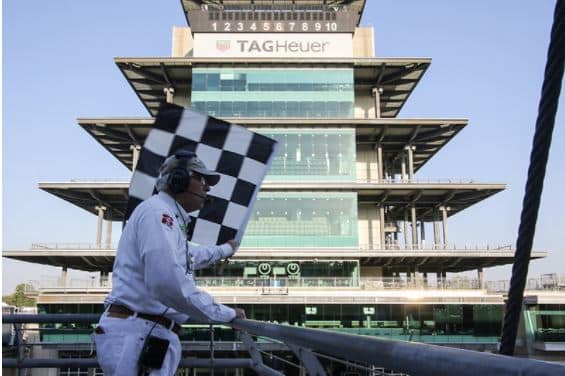 The 58th Runoffs wrapped last weekend, bringing to conclusion the second time this historic event was hosted at Indianapolis Motor Speedway. The first time, in 2017, more than 1000 cars hauled to Indy for a chance to race on the iconic track. For 2021, the numbers were equally impressive, with almost 900 entries for the week long event.

NER sent 36 drivers this year.  As in 2017, both the Spec Miata and Spec Racer Ford 3 classes were oversubscribed. With a max of 72 cars allowed on track, Last Chance Races were held for everyone with qualifying times putting them in 60th position or higher. The top 12 finishers from the LCR would move on to compete in the championship race.

And in the surprise turn around, making it one of the most talked about classes this week, B-Spec went from the class deemed on the verge of dying off just a few years ago, to sporting the 3rd biggest group (61 drivers), putting on the largest B-Spec race in history. 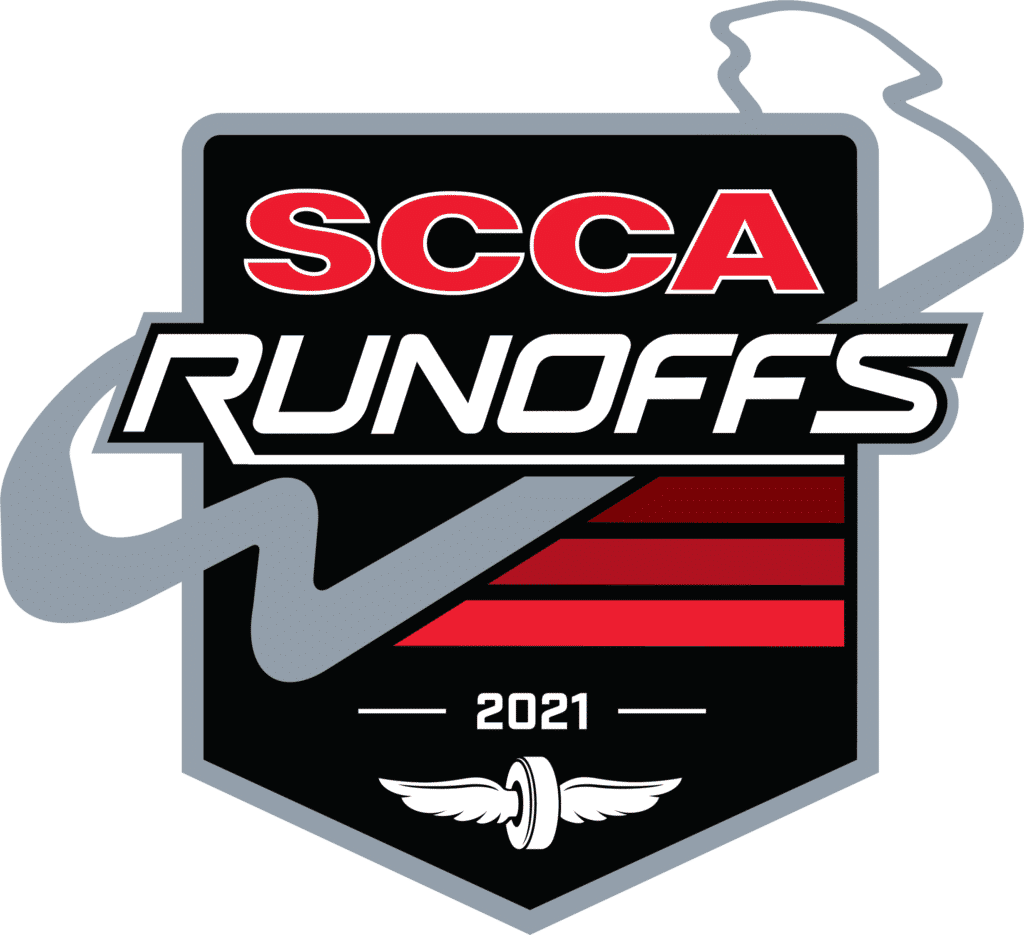 A Week of Racing

Original weather predictions had clear skies and mid 70-degree temps predicted for the week. Through testing and practice, that was the case. Once qualifying started on Tuesday, the temps started to rise as well. By Wednesday, air temperatures were into the 90’s, with some track locations measuring triple digits on the asphalt.

All qualifying was finished under dry (although warmer than expected) conditions. And when racing began on Friday, this continued. More reasonable and comfortable weather in the high 70’s and low 80’s returned as T4 kicked off the first race on Friday morning, and continued throughout the day. Come Saturday, the morning races were overcast and everyone began watching the radar. Rain was inbound, and the potential for storms with lighting that could shut down the track were a concern.

The skies opened up late morning, causing the majority of Saturday’s races to be on an at least wet track, if not in an actual utter downpour. And the rain continued through Sunday as well. In fact, as the event came to a close, and everyone gathered for the final toast, the clouds parted and a giant rainbow appeared over the track.

Part of what makes the Runoffs fun is the parties! Monday night’s kick-off part included music by The Indigos at the Pagoda Pavilion. Then on Wednesday, SCCA took a page out of the NER handbook and organized their own version of our Paddock Crawl. Regions and race teams throughout the paddock hosted food and beverages, and all the week’s participants – workers, drivers, families and crew – were able to walk through, enjoy the eats and drinks, and mingle with everyone throughout the night.

NER’s party was led by our own Greg Amy and JB Swan – on the grills cooking burgers, dogs, and sausages. Greg and JB coordinated the food and beer donations, cooking, and did a great job hosting all the visitors through the paddock party. The region also had a Jägermeister shot station, and 4 kegs of beer. Most block party locations had similar offerings, but one of the standouts came from the Grasspaddock Motorsports team that put out a spread of seriously high end desserts. Pure decadence.

Thank you to the following companies that provided the kegs for the party! 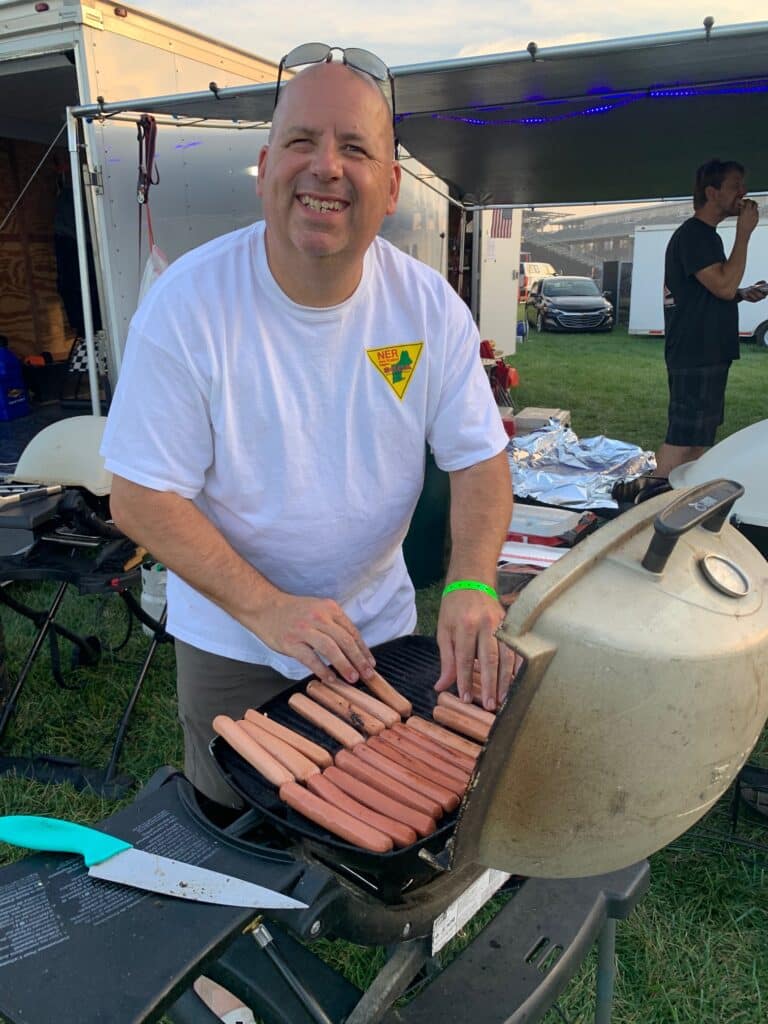 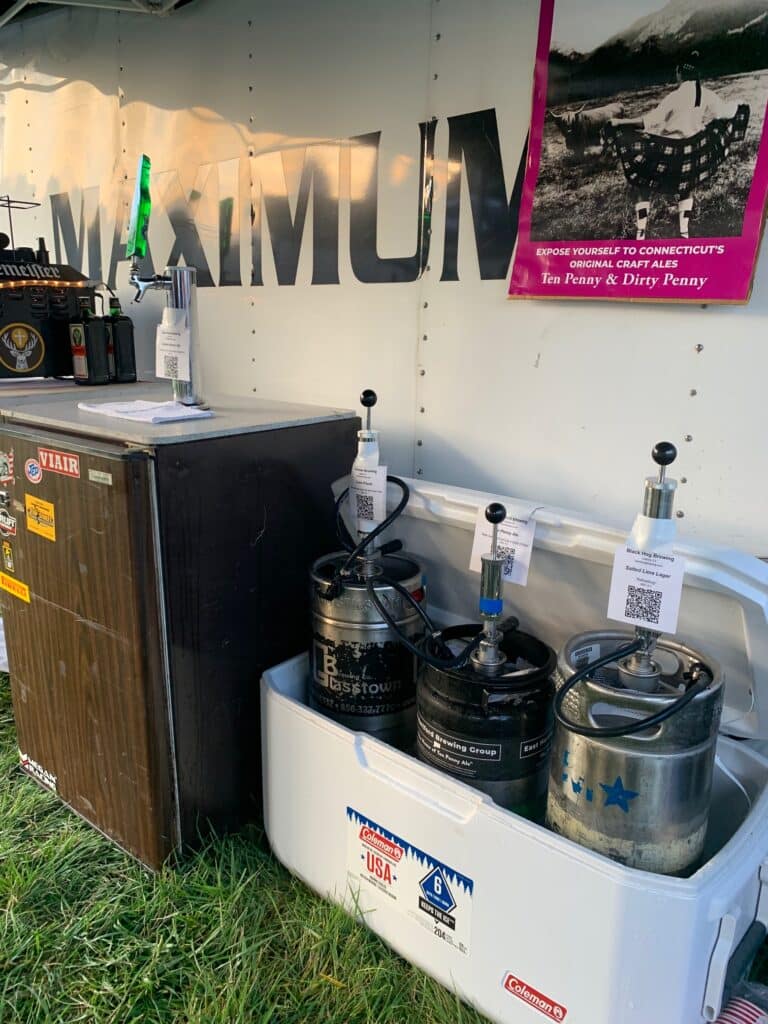 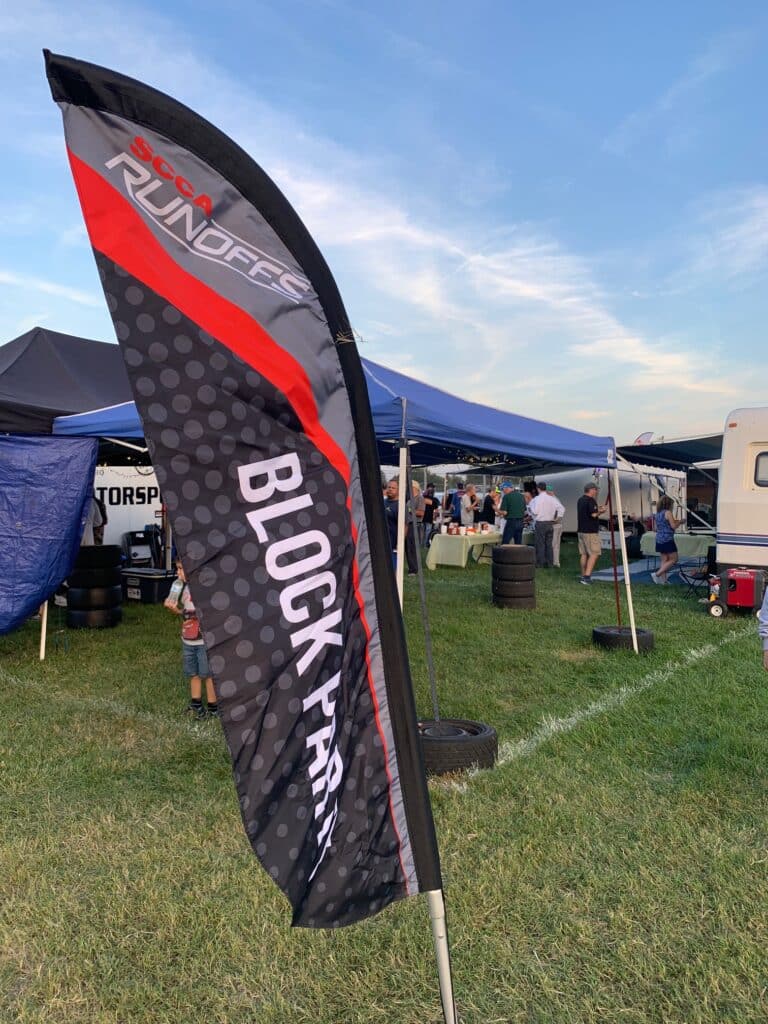 While the parties and qualifying kept everyone busy, the real action was the races. The pinnacle of each road racing season, where 26 drivers get to return home taking with them the title of National Champion.

Unfortunately, one of the biggest take-aways from the 26 races was the high number of Full Course Yellows. Racing was paused continuously as incidents on track required safety vehicles to enter the course. T4, the first race of the weekend, saw only 3 green flag laps for the entire race. And multiple races ended behind the pace car as the FCY conditions prevented a race to the checker. In an ironic twist, the Spec Miata group – known for their rough and tumble racing – actually put on one of the cleanest races of the week, remarkable given they had 72 vehicles all out there battling wheel-to-wheel.

Despite all of that, NER had a couple stand-out performances and highlights from the week.  Stephen Blethen was the lone Tire Rack Pole Winner from our region in T4. Our only podium finish went to Steve Introne in his B-Spec, finishing 3rd. We also had a few top ten finishes (see the full list at the top of this article.) And a number of drivers that made their first appearance at the Runoffs. Here are some of those details. 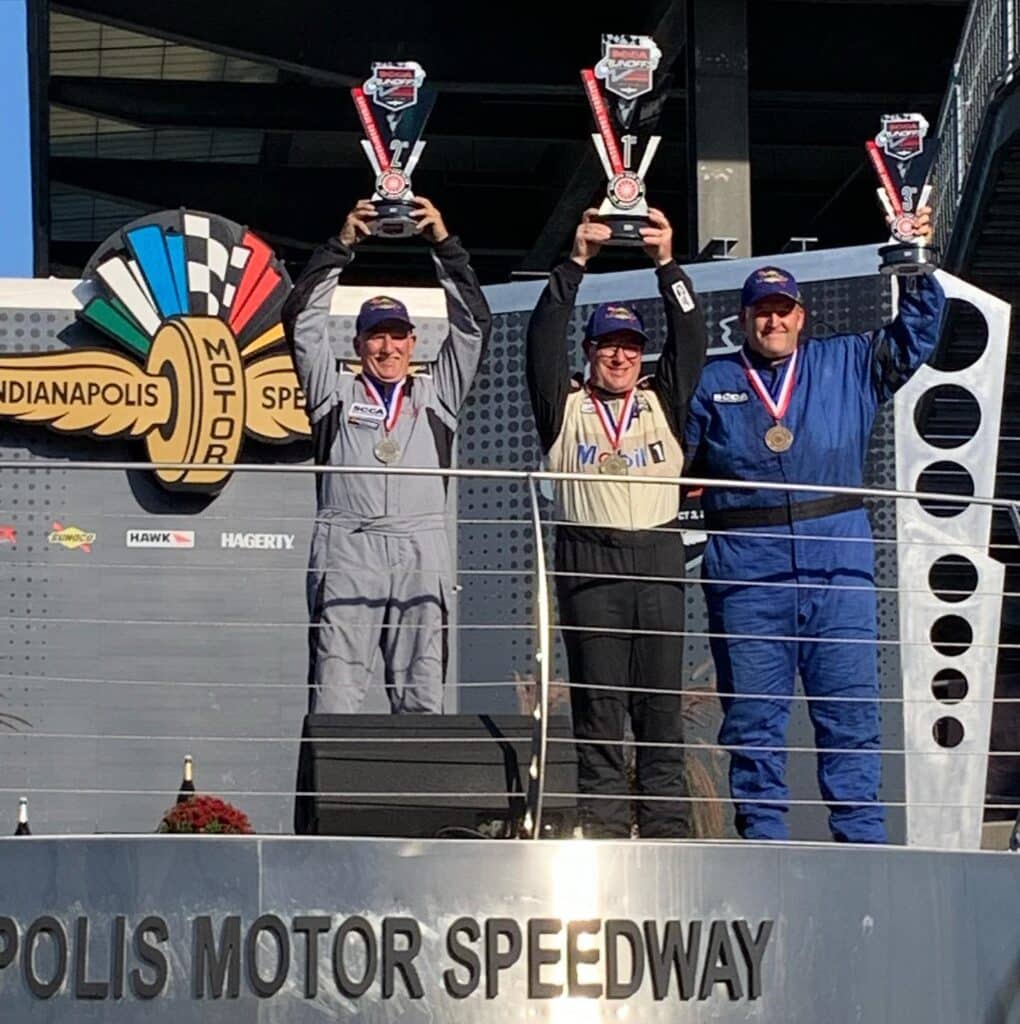 The lone podium finisher from NER this year was Steve Introne in his #12 Mini Cooper B-Spec. As a region, we’ve followed Steve and JB Swan as they built B-Spec cars from scratch with the goal to race them at Indy. Both drivers completed that goal, with Steve claiming P2 on the grid for the race, and finishing in 3rd overall to claim his first Runoffs podium finish ever.

T4: Stephen Blethen Gets the Pole

Taking the lone Tire Rack Pole Position award at the Runoffs for NER was Stephen Blethen in his T4 Mazda RX8. His twin brother, Raymond, wasn’t far behind, earning at 5th place starting position. From his first qualifying session where Stephen sat 11th, 2 days later he found the speed and grabbed the P1 spot. Unfortunately, the first race was marred by serious incidents, knocking Raymond to the back and taking Stephen out completely. A disappointing end to a great week and run. 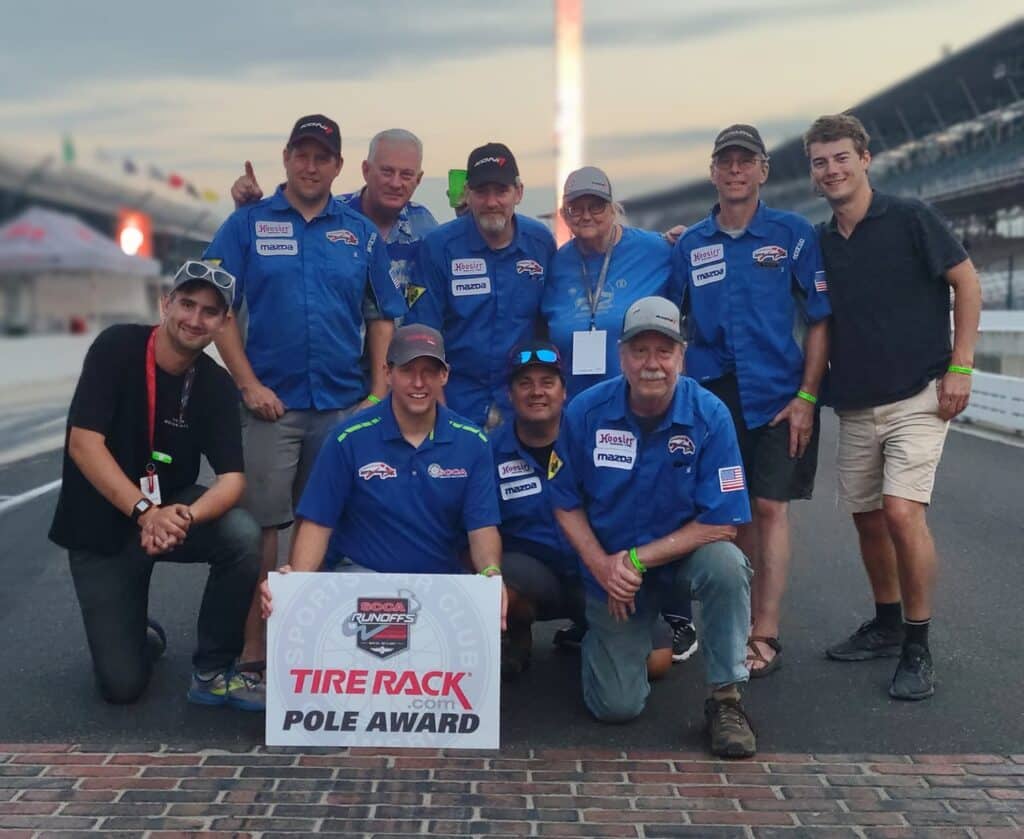 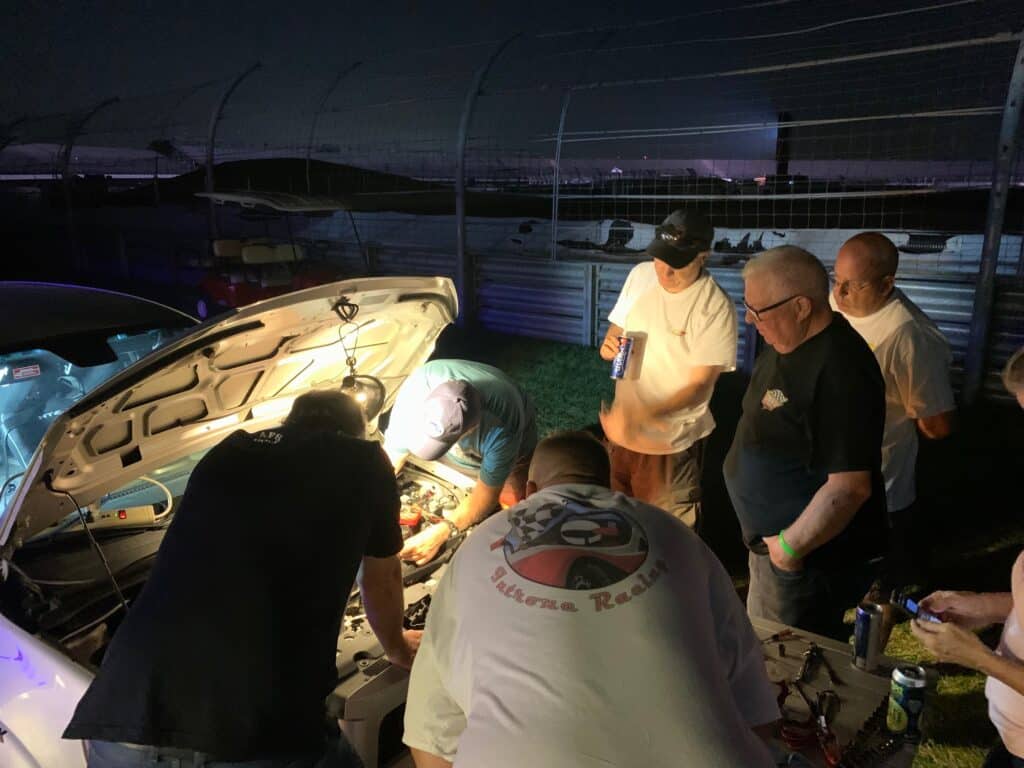 It Takes a Village

After the second qualifying – JB Swan came into the pits with a non-working engine fan, which led to an electrical failure on his #3 B-Spec Chevy Sonic. As his crew struggled to diagnose the issue, the SCCA family was rallied. In the end, other B-Spec drivers and people that work for GM brought their knowledge to the task. After more than a few hours, the fried ECU was discovered, repaired, and JB was back and ready for his final qualifying session.

From TNiA to the Runoffs

It was just 6 years ago, in 2015, that Allen Briere showed up at a TNiA event at Thompson Speedway. Two years later, he got his first competition license. And now, just 4 short years later – Allen is at the Runoffs competing in his VW GTI. He qualified 20th and finished 16th. An amazing testament to how drivers can progress from track nights, to wheel-to-wheel racing, and even find themselves at the biggest club racing event of the year in such a short time. 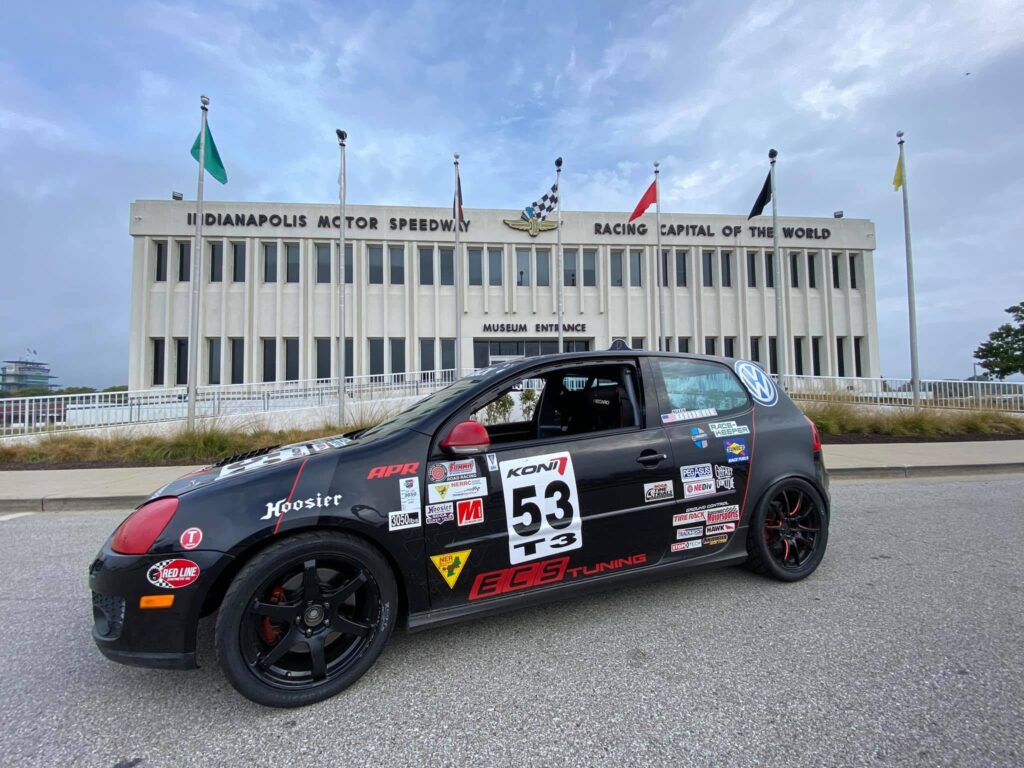 Watch It All Again

Coverage of each race day is currently available on YouTube. Individual races will be broken out and posted soon, so stay tuned. Also expect to see some of the races broadcast on TV later this year.