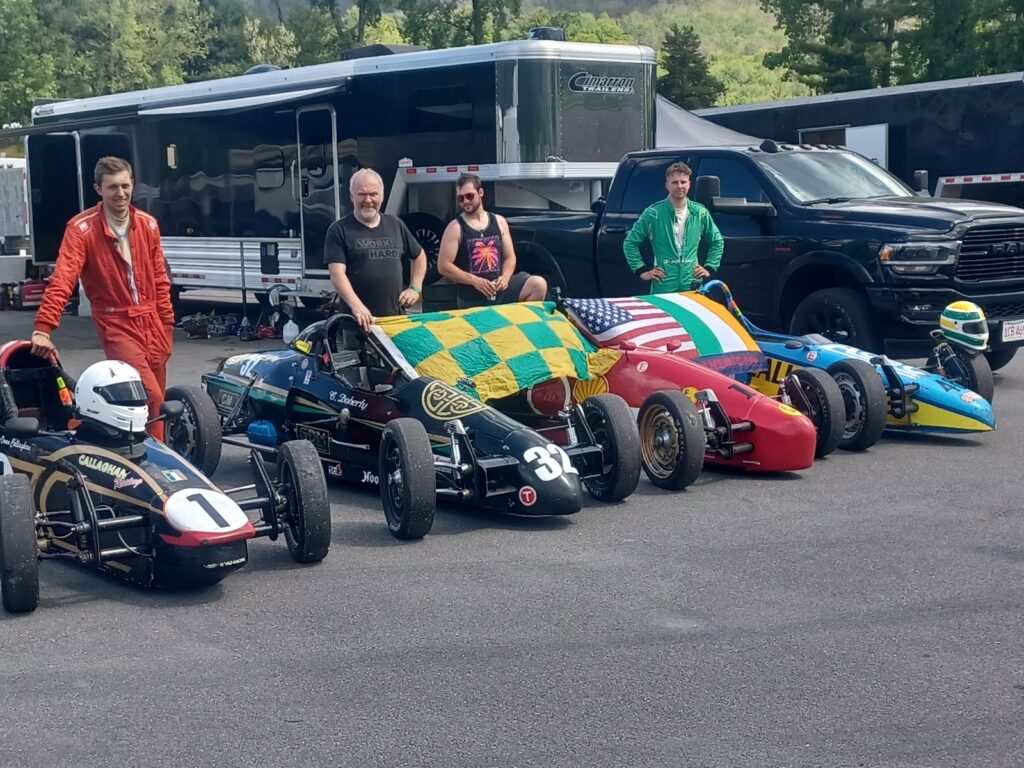 Family connections are found throughout SCCA and New England Region. You will often see siblings, cousins, grandparent-parent-child all working and competing together at various events. But even in a region where such relationships are commonplace, what happened at the Lime Rock Park Paddock Crawl Regional Race was unusual. Such family get-togethers generally don’t involve passports, visas, and international flights.

This story actually begins a couple of decades ago and an ocean away, when Gerard Callaghan and his brother-in-law, Brian Kelly bought a Formula Vee to compete in Ireland’s Formula Vee Championship Series. Soon, Gerard bought a second car and the pair enjoyed racing together. Brian went on to win three championships in that first car.

Fast forward and a continent later, Gerard and his family are living in the United States, and it was only natural that they found SCCA and NER’s Formula Vee racing community. Racing continues to be a family hobby and the FV paddock welcomed them. Gerard’s son, Gerard Owen Callaghan was the 2020 Rookie of the Year in the Northeast Formula Vee series and is the 2021 NEDIV and NERRC Champion in the class. Brian and his two sons, Jordan and Owen Kelly are having similar success in Ireland. Jordan is currently leading the Irish FV championship series driving the same car Gerald and Brian bought years earlier.

Again, it was only natural the cousins would want to race together. To make that possible, Gerard would have to find and prepare two additional cars and the Kelly brothers would have to find a time and a track that fit outside their Irish championship schedule. The Lime Rock Paddock Crawl was the perfect time and place. Jordan and Owen could learn the track through sim-racing and enjoy a 10-day visit to the United States without interrupting their season in Ireland. After months of planning and preparing, the brothers flew to the U.S.

Despite having to adjust to slightly different cars, tires, and steering in the U.S. FV chassis, the visitors from Ireland secured top ten finishes, although they weren’t able to best their cousin on this side of the Atlantic. Perhaps in October, when Gerard and Gerard Owen Callaghan hope to return to Ireland for a race, the results will be different.