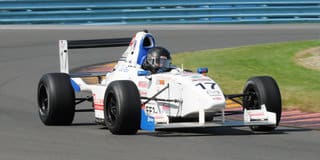 TOPEKA, Kan. (Sept. 10, 2019) – The SCCA® U.S. Majors Tour® Northeast Conference has wrapped up its 2019 calendar. More than 800 racers took part in the Conference’s 12-round season that visited six different venues. Drivers who excelled have earned a 2019 Northeast Conference championship.

Special kudos goes to longtime SCCA racer Scott Rettich. This year in the Northeast Conference he managed to scoop up two championships. One was in Spec Racer Ford Gen3 where he bested more than 100 other competitors. He also managed to gobble up the Formula Enterprises 2 championship, too, taking seven victories along the way.

The Northeast Conference saw several hotly contested championships this year. Formula Vee® was decided by only one point as Gary Kittell and his Caracal D/SB just barely came out ahead of Roger Siebenaler in a Mysterian M2 racecar. Siebenaler had more wins on the season with five, but Kittell had more points thanks to competing in more races.

Two points was the winning margin in two other Northeast Conference classes. In American Sedan® it was Jason Smith who edged out James Jost, 155 points to 153 points, with both competitors driving Ford Mustangs. And in B-Spec it was David Oliveira who claimed the title over Frank Schwartz, 114 points to 112 points, with both of those drivers hustling MINI Coopers. Drew Strickland, piloting a Honda Fit, was only seven points behind Schwartz in third place.

Five points made all the difference in Prototype 1 (P1) as Greg Bell, driving a Stohr WF1, claimed the P1 Northeast Conference championship with 80 points as compared to the 75 points of runner-up William Munholland and his Elan DP-02 car. Five points was also the winning margin in Formula Mazda as Mike Anderson brought home the title over Anthony Victor Seaber. Robert Noell finished third in the standings only three points behind Seaber.

Other close Northeast Conference championships included E Production where Donald Walsh and his Mazda RX-7 won out over the Honda Civic Si of Greg Amy by seven points, and nine points was the winning margin in Formula 1000 as John Homan took the championship in a RFR F1000 over the Elan DB08 of runner-up Kevin Boeckle.

The Northeast Conference began its 2019 schedule with an exciting Hoosier Racing Tire SCCA Super Tour at VIRginia International Raceway. Round 3 and Round 4 then took place at Summit Point Raceway in West Virginia, followed by a single race weekend in May at Pittsburgh International Race Complex. June also saw a single event, which was a Hoosier Super Tour at Watkins Glen International in Upstate New York. The calendar then closed out in July with Round 9 and Round 10 at Thompson Speedway Motorsports Park in Connecticut before the final weekend of racing at New Jersey Motorsports Park.

Conference points are awarded to the top 20 finishers in each class. Winners earn 25 points, and 21 points go to second. Points are then doled out to others starting with 18 and descending to a single point for the 20th finisher. Only the best eight finishes at Northeast Conference races count towards a driver’s point total.  Below are Northeast Conference champions with Class: Name, Hometown, SCCA Region and Car.

The Sports Car Club of America®, Inc., founded in 1944 and currently celebrating its 75th Diamond Anniversary, is a 67,500-member motorsports organization that incorporates all facets of autocross, rally and road racing at both Club and professional levels. With headquarters in Topeka, Kansas, the SCCA annually sanctions over 2,000 events through its 116 Regions and subsidiary divisions. Much of the SCCA’s activities are made possible with support from the following Official Partners: Hagerty, the Official Insurance Partner of SCCA; Hawk Performance, the Official Brake Products of SCCA; Sunoco, the Official Fuel of SCCA; and Tire Rack, the Official Tire Retailer of SCCA. To learn more, please visit www.scca.com.

Photo: Scott Rettich claimed two U.S. Majors Tour Northeast Conference championships, one in FE2 (pictured) and the other in SRF3